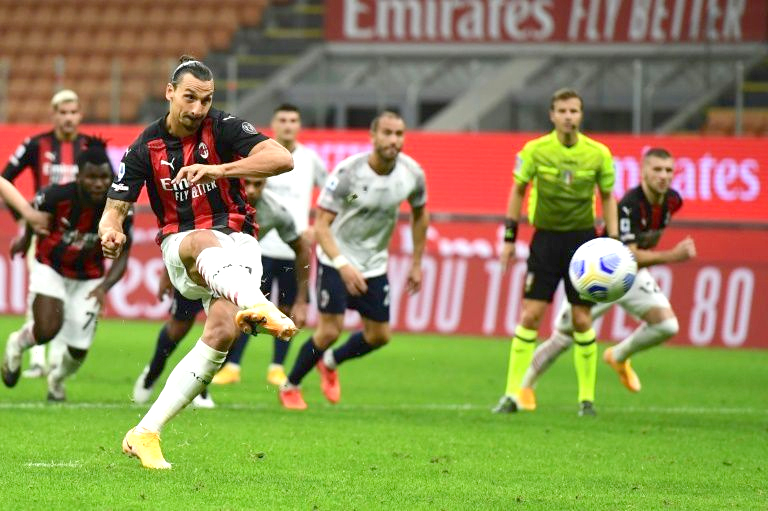 MILAN, September 22: Zlatan Ibrahimovic scored twice as AC Milan got their Serie A campaign up and running with a 2-0 win over Bologna on Monday.
Ibrahimovic, who turns 39 next month, showed he has lost none of his goal-scoring skills having also netted last week against Irish side Shamrock Rovers in the Europa League.
“If I had been 20 years old I would have scored two more goals,” said the Swede of his display.
“I’m like Benjamin Button, born old, but I’ll die young. Seriously, the team has worked well: you can see we’re not at 100 percent yet, but it was important to start well.
Ibrahimovic grabbed the opener in the 35th minute, rising higher than Danilo to get his head to a Theo Hernandez cross, and celebrated in front of the 1,000 spectators allowed into the San Siro for the first time since the coronavirus pandemic — mostly invited frontline health workers who had
toiled during the worst of the crisis.
The Swede missed a chance for a second shortly after when he was denied by a sliding tackle from Brazilian defender Danilo.
But six minutes after the break he added a second from the penalty spot after a Riccardo Orsolini foul on Ismael Bennacer.
He missed a chance for a third just after the hour mark following a counterattack launched by Hakan Calhanoglu, but Lukasz Skorupski proved solid in the Bologna goal.
Bologna were again saved by Skorupski at the end of the match, with the Pole pushing out a Hernandez volley.
Milan keeper Gianluigi Donnarumma also won his duel against Andreas Skov Olsen while Federico Santander hitting the woodwork for the away side.
Bologna finished a man down with Mitchell Dijks send off with two minutes to go but it made no difference to the match.
“They had Ibrahimovic, we didn’t,” said Bologna coach Sinisa Mihajlovic.
“Ibra made the difference, everything Milan created came through him. But it was a balanced game.
“Maybe we didn’t believe in ourselves enough, but the lads were in it to the end, we created two big scoring opportunities.” (AFP)