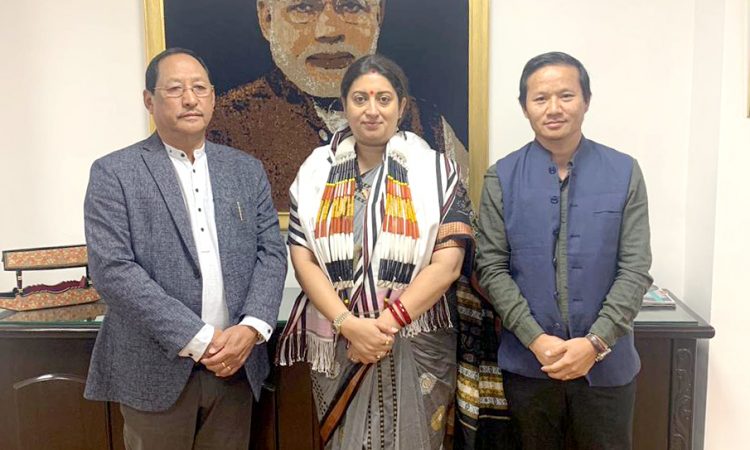 Dimapur, November 30: In a bid to boost economic empowerment of the needy in Nagaland, Zhaleo Rio, IAS (Retd.), Advisor to the Department of Sericulture, Excise & Minority Affairs, met Smriti Irani, Union Minister of Textiles at New Delhi on November 25.
While expressing appreciation to the Union Minister for sanctioning 5 Sericulture Developmental Projects for Nagaland since 2014-15 to 2018-19 under North East Region Textile Promotion Scheme (NERTPS), Zhaleo Rio said approximately 18,000 families have been identified as sericulturists in Nagaland and of which about 5000 farmers have been assisted under the scheme. He revealed that Nagaland was awarded the “Best Eri producing state in the country” in 2018 for its quality produce in sericulture.
During the interaction, Zhaleo highlighted that there are still thousands of identified sericulturists in dire need of assistance and requested the Union Minister to consider those project proposals under submission to the Ministry through NERTPS during 2019-20 which can cover about 3000 families including the request for extension of NERTPS programme among NE states particularly Nagaland, which is a resource crunch state.
The Union Minister assured to help the state in all possible ways and also expressed optimism on continuation of NEPTRS programme.
The Advisor was accompanied by his OSD, Zaputuo Lhoungu, besides other department officials.
(Page News Service)