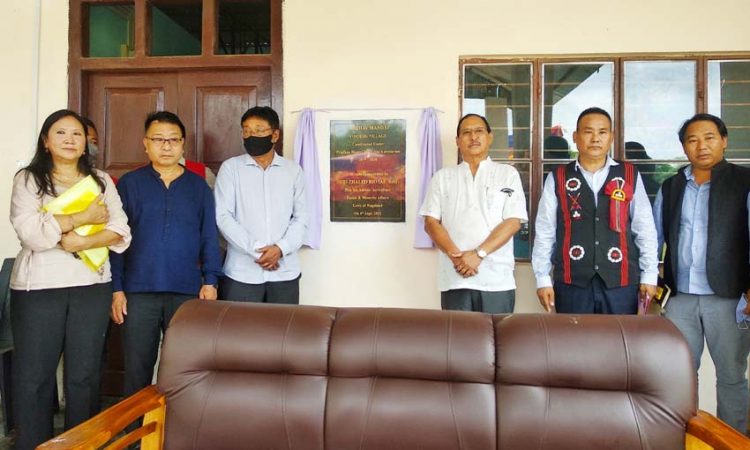 Zhaleo Rio, IAS(Retd.), Advisor, Sericulture, Excise & Minority Affairs, pose along with other officials after inaugurating the new Sadbhav Mandap at Vihokhu on Sept. 4, 2021.

Speaking at the function as special guest, Zhaleo stated that the common facility centre was constructed through sponsorship from the Department of Minority Affairs, Government of India under PMJVK during 2019-20.
He opined that Nagas can be considered as minority because Christians are a minority at the national level and further informed that setting up of Minority Community blocks are in the process since Niuland sub-division is the lone recognised block in the state.
Rio expressed satisfaction with the construction works and everyone involved in the successful completion of the multi centre. He advised that the public must utilise it to the optimum but at the same time, manage and maintain the centre as a priority.
“It is an asset created for the benefit of public and leaders must coordinate to ensure its utilisation and management, etc.”, he added. Rio also disclosed that he is concerned to usher in more developments in the health, road, school education sectors, etc. Talking about Covid issue, he noted that it is here to stay and that the third wave may hit anytime. “Every eligible person should get vaccinated”, he urged and cautioned the people to remain vigilant anyhow even after vaccination by following all guidelines. (Page News Service)