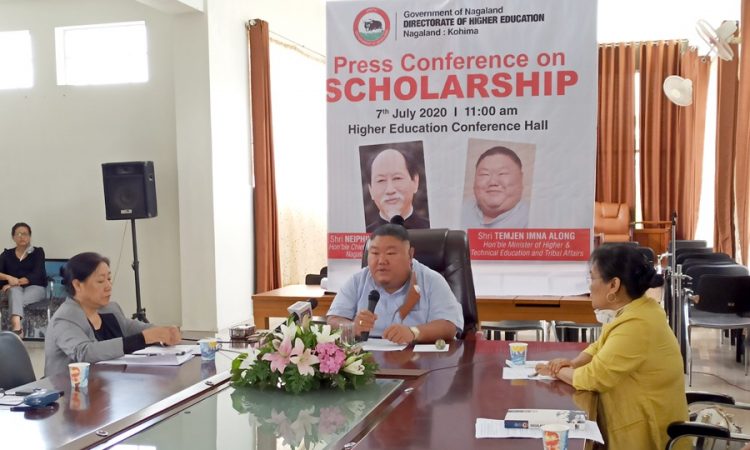 Kohima, July 7: Minister for Higher & Technical Education, Temjen Imna Along today declared zero tolerance to any form of corruption in scholarship disbursement in the State.
Addressing a press conference today here at the Directorate of Higher Education to announce the release of the first installment of post-matric scholarship and implementation of 3 scholarship schemes, Imna Along said it is the endeavour of the PDA-led Government under Chief Minister Neiphiu Rio to make sure that scholarships are disbursed in time and there is zero tolerance to any form of corruption in scholarship disbursement.
He acknowledged that there were problems and hiccups in the beginning in regard to delayed release of scholarship last year in the month of January, but assured that there won’t be such delay or any form of corruption in the disbursement of scholarships in the days to come.
The minister thanked Jitendra Singh, Minister of DONER for the NEC-stipend and book grant which Nagaland is also availing like the rest of the Northeastern states. Maintaining that the grant is not only for Naga students but also for NE students living in Nagaland and studying, Imna appealed to the concerned students, be it from Arunachal, Manipur, Assam or from any NE states to avail the NEC- stipend and book grant at all cost.
Stating that the Department is solely working for the welfare of students’ community, the Minister also appealed to all underground groups not to demand anything from the Department.
“It is not that we do not like them but as this Department works solely and wholly for students’ welfare, this department should be exempted from any kind of demand,” he reasoned.
OSD (scholarship branch/cell), Keduoselie Keyho gave a brief outline of scholarship schemes implemented by the Directorate of Higher Education. Among the implemented schemes is Post Matric Scholarship for ST students of Nagaland, State Merit & Research Scholarship and NEC – stipend & book grant.
While the funding pattern of the PMS and NEC-stipend & book grant scholarship is 90:10, with the Central Government set to pay the bigger percentage, the State Merit & Research Scholarship will be 100 % State funded.
ANCSU president, Vimeyiekho Vitso said the union has been appealing to the State Government to come up with a scholarship cell, a common model to implement all kinds of scholarships schemes in the State. He was optimistic that the Department is working on it.
Vitso also informed that between 2014-2017 and till date there are 860 students/beneficiaries who were yet to claim their scholarships, altogether amounting to around Rs 38 lakhs. “Whatever needs to be done with this amount we request the department to do these needful,” he said.
The ANCSU president also expressed appreciation to the department for coming up with the public financial management system, through which the department has minimized the time taken to disburse scholarships. (Page News Service)