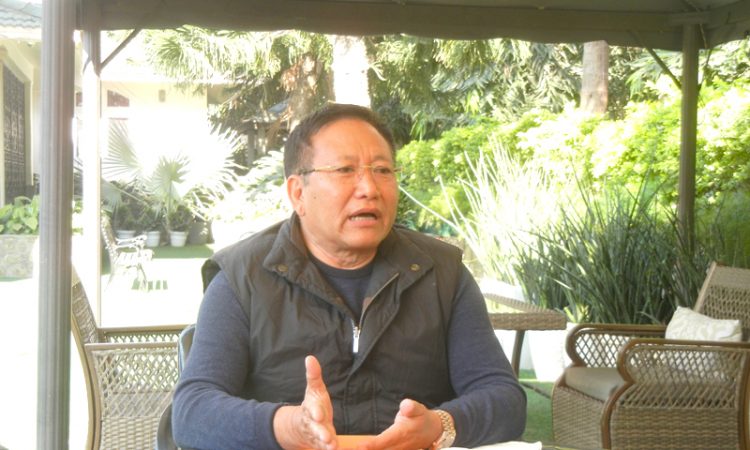 Dimapur, January 5: Leader of Opposition, T R Zeliang today questioned the PDA Government as to why grant-in-aid to Village Development Boards (VDBs) have not been released even after the High Level Committee (HLC) had approved Rs 96 crore out of Rs 185.05 cores for the years 2015-16, 2016-17 and 2018-19.
Addressing media persons at his residence here, Zeliang said out of a good number of schemes in Rural Development Department, this is the only scheme which touches every household.
He said the Government found it difficult to meet the requirements in 2016 and had approached the Centre to grant additional fund. The Niti Ayog granted Rs 185 crores towards grant-in-aid and implemented some schemes in School Education, Power and PHE Departments, etc.
He said as per laid down guidelines, a High Level Committee, under the chairmanship of the Chief Secretary was constituted by the Governor of Nagaland on December 13, 2017. The HLC had their first sitting and accordingly the allocation and sub-allocation of the grant was finalized and signed on January 17, 2018. However, due to Model Code of Conduct, which came into effect following the announcement of the State assembly election by the Election Commission of India on January 18, 2018, the fund could not be released by the previous DAN Government.
The Leader of Opposition said after the PDA Government was formed in the month of March, the Finance Department released the total amount of Rs 185.09 crores. However, in contravention to the guidelines, the present Government has not released the grant-in-aid to the VDBs of the State.
Zeliang disclosed that the grant-in-aid for 2017-18 has already been provided by the State Government, adding this Rs 96 crores should have directly gone to the VDBs.
Stating that Rs 32 crore each year should have gone to the VDBs by March/April, Zeliang questioned as to why the present Government has delayed release of the money.
“When Central Government has released the fund and the process has been completed by January, why the Government has not released the money,” he said adding this issue was raised but the Department concerned failed to give any reply.
He further said the people deserve to know why the money has not been released till today.
Zelaing also alleged that the present Government in total violation of the guidelines has failed to allocate the funds as finalized by the HLC and urged the Governor to take cognizance of this irregularity. He questioned as to why the decision of the HLC constituted by the Governor was overlooked.
Citizenship Amendment Bill
Dwelling on the Citizenship Amendment Bill, the Leader of Opposition said the Bill was listed for discussion during the last Assembly Session but was not discussed. He said all tribal people are agitating against the bill, while political parties like AGP and JDU has also opposed the Bill. He asked as to why the Nagaland Government has not opposed the Bill.
Zeliang also demanded to know the stand of the PDA Government on the Citizenship Bill before it is passed by the Parliament.
Quoting PDA’s statement that Nagas are protected under Article 371 (A) and the ILP Act, Zeliang said, “This has nothing to do with the Citizenship Bill.”
He said he had written a letter to Chief Minister on July 10, 2018 on the issue, but the latter has not replied till date.
He further said before the completion of the first month of the year, the Government should clarify its stand on the Citizenship Bill.
MLA Imkong L Imchen said Citizenship Bill 2016 is going to be a negatively determining factor for the survival of Naga people.
He quoted a press conference of Chief Minister, Neiphiu Rio in New Delhi, wherein Rio had reportedly mentioned that the state Cabinet has decided not to oppose the bill.
“I cannot say that chief minister does not know the real legal implications of Article 371(A). I assume that as chief minister he knows better than anyone of us. Therefore, Rio mentioned that since we have Article 371(A) we will not oppose the Bill,” Imkong stated.
Recalling the state Cabinet decision on July 15, 2018, Imkong stated that the Cabinet discussed the proposed Citizen Amendment Bill of Government of India, wherein the NSF and other bodies have expressed apprehension on the fall out of such amendment.
Stating that the Government’s decision not to oppose the said Bill was “an insult to the intellect of the Naga people,” Imkong said there is speculation that after the Bill is passed, it would provide citizenship to illegal migrants from Afghanistan, Bangladesh and Pakistan, who are of Hindu, Sikh, Buddhist, Jain, Parsi or Christian extraction unlike Inner Line Permit which only provides access to outsiders for inward travel to Nagaland.
He said, “Once it becomes a law, it cannot be over-ridden by Article 371 (A), rather once it becomes a law, it would override Article 371 (A) and we cannot do anything.”
He further said, “Bangladeshi Christians shall never come to Nagaland, but Bangladeshi Muslims will, provided they accept Hinduism. That is the logic behind the amendment.”
Imkong also questioned as to why Prime Minister Narendra Modi is apprehensive of the Christians in India when they have not done anything against him in person or the BJP party.
MLA Moatoshi was also present in the press conference. (Page News Service)