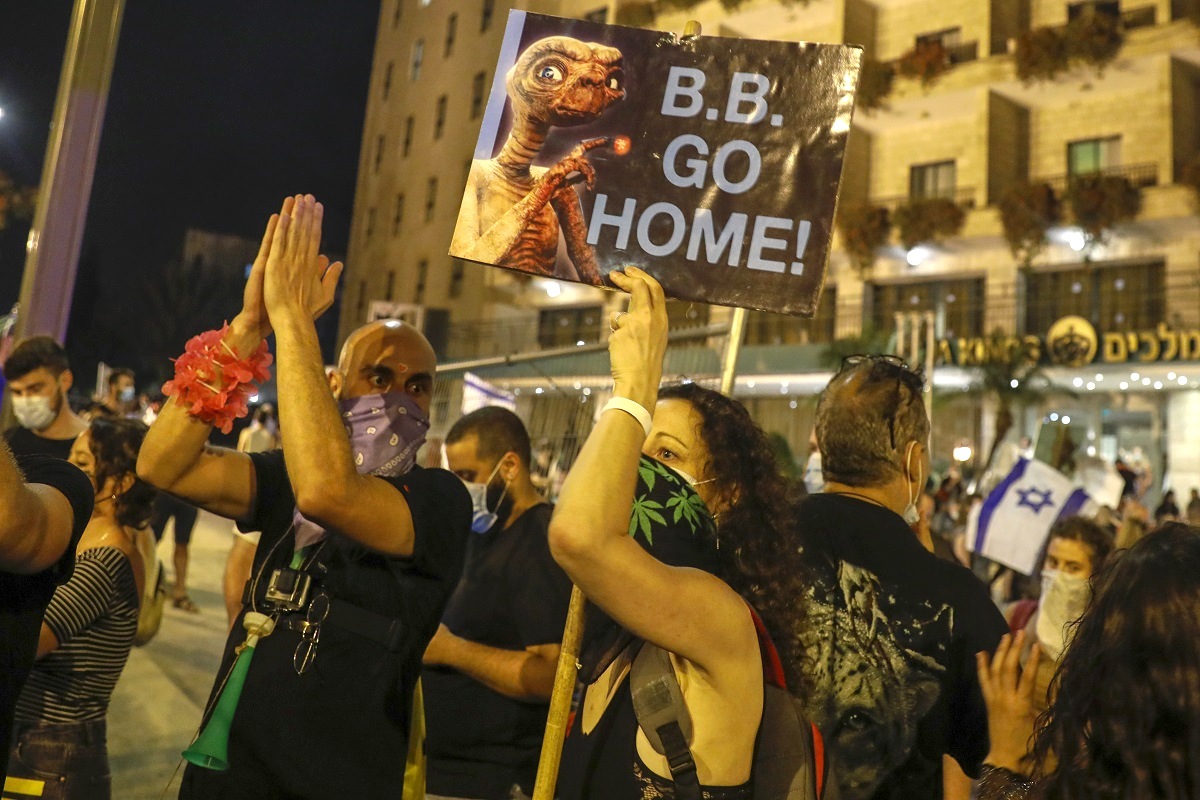 Protesters hold placards during a demonstration against the Israeli government near the Prime Minister's residence in Jerusalem on August 8, 2020. (Photo AFP)

NEW DELHI, AUGUST 9: Thousands of Israelis rallied outside Prime Minister Benjamin Netanyahu’s residence in Jerusalem on Saturday as anger mounted over corruption allegations and his handling of the Coronavirus crisis.
Demonstrators were raising slogans “Your time is up”, as they waved Israeli flags and called on Netanyahu to resign over what they say is his failure to protect jobs and businesses affected by the pandemic.
The protest movement has intensified in recent weeks, with critics accusing Netanyahu of being distracted by a corruption case against him. He denies wrongdoing.
“Netanyahu is fighting to get Israel’s economy back to normal and to transfer funds and grants to Israeli citizens,” Likud said in a statement posted to Netanyahu’s Twitter page.
Protests have stretched beyond Netanyahu’s official residence in Jerusalem, with many Israelis gathering on bridges and highway junctions across the country.
On a busy highway overpass north of Israel’s commercial hub of Tel Aviv, demonstrators waved black flags and chanted slogans while cars honked their horns from the road below.
Last month, thousands of protesters took to street in Tel Aviv to protest against what they say is economic hardship caused by the Government’s mishandling of the Coronavirus crisis.
Many are experiencing economic hardship and have been angered by Coronavirus measures which have taken their livelihoods away.
In May, Netanyahu was sworn back into office as head of a rare national unity Government, was expected to attend the opening session of the trial.
Netanyahu, a hard-line leader of the right-wing Likud party, has served as the Prime Minister since 2009.
Israel imposed a strict lockdown in mid-March but started lifting restrictions in late May. Unemployment has risen to 21%.
(Courtesy: TS)