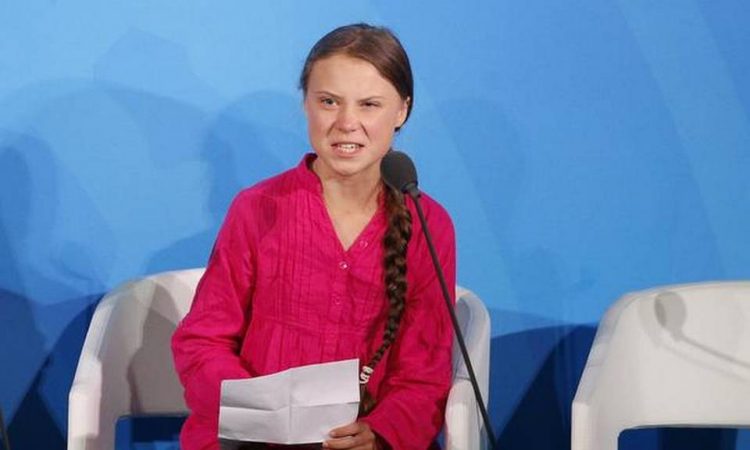 United Nations, September 23: Teenage climate change activist Greta Thunberg on Monday opened the United Nations Climate Action Summit with an angry condemnation of world leaders for failing to take strong measures to combat climate change — “How dare you,” she said.
Days after millions of young people took to the streets worldwide to demand emergency action on climate change, leaders gathered for the annual United Nations General Assembly were to try to inject fresh momentum into stalling efforts to curb carbon emissions.
Thunberg, visibly emotional, said in shaky but stern remarks at the opening of the summit that the generations that have polluted the most have burdened her and her generation with the extreme impacts of climate change.
“This is all wrong. I shouldn’t be up here. I should be back in school on the other side of the ocean yet you all come to us young people for hope. How dare you,” she said.
“You have stolen my dreams and my childhood with your empty words,” Thunberg said.
U.N. Secretary-General Antonio Guterres, who convened the summit, had warned governments ahead of the event that they would have to offer action plans to qualify to speak at the summit, which is aimed at boosting the 2015 Paris Agreement to combat global warming.
In his opening remarks, he tried to capture the urgency of climate change and called out the fossil fuel industry.
“Nature is angry. And we fool ourselves if we think we can fool nature, because nature always strikes back, and around the world nature is striking back with fury,” Mr. Guterres said.
“There is a cost to everything. But the biggest cost is doing nothing. The biggest cost is subsidising a dying fossil fuel industry, building more and more coal plants, and denying what is plain as day: that we are in a deep climate hole, and to get out we must first stop digging,” he said.
With climate impacts such as extreme weather, thawing permafrost and sea-level rise unfolding much faster than expected, scientists say the urgency of the crisis has intensified since the Paris accord was agreed.
The agreement will enter a crucial implementation phase next year after another round of negotiations in Chile in December. Pledges made so far under the agreement are nowhere near enough to avert catastrophic warming, scientists say, and last year carbon emissions hit a record high.
Over the past year, Mr. Guterres has called for no new coal plants to be built after 2020, urged a phase-out of fossil fuel subsidies and asked countries to map out how to achieve carbon neutrality by 2050.
While some countries have made progress, some of the biggest emitting countries remain far behind, even as wildfires, heat waves and record temperatures have provided glimpses of the devastation that could lie in store in a warmer world.
In a measure of the gap between government action and the ever-louder alarms sounded by climate scientists, the United Nations Development Programme said that 14 nations representing a quarter of global emissions have signalled that they do not intend to revise current climate plans by 2020. (Agencies)