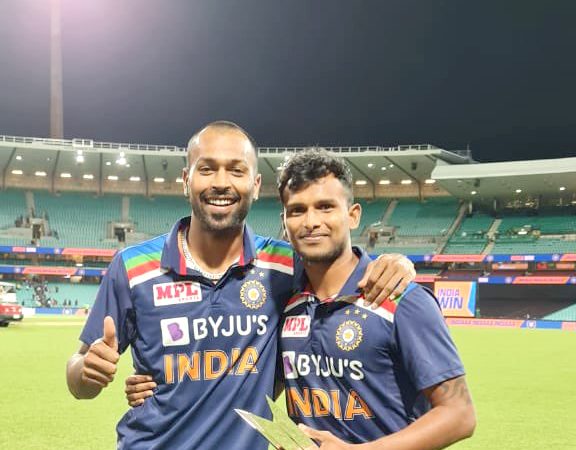 SYDNEY, December 8: Adjudged Player of the T20 Series for his superb show with the bat against Australia, India all-rounder Hardik Pandya on Tuesday said that newcomer T Natarajan deserved it more than him for his “outstanding” bowling performance.
Hardik in a heartwarming gesture gave his MOS trophy to new pace sensation Natarajan. He tweeted about the same with a photo where Natarajan can be seen standing with the trophy. In the group photo of the team also Natarajan can be seen with the MOS trophy in his hand.
The 29-year-old from Tamil Nadu has been sensational since making his international debut in the third ODI at Canberra, snapping eight wickets in four matches.

“Natarajan, you were outstanding this series. To perform brilliantly in difficult conditions on your India debut speaks volumes of your talent and hardwork.
You deserve Man of the Series from my side bhai! Congratulations to #TeamIndia on the win,” Pandya tweeted.
Natarajan returned with impressive figures of one for 33 in his four overs in India’s 12-run loss in the third T20I. Virat Kohli’s men claimed the series 2- 1.
Earlier, Natarajan had captured three wickets in the first T20I before claiming another two in the second game to help India take an unassailable 2-0 lead.
He had made a memorable debut for the country in the third one-dayer against Australia, snapping two wickets in the team’s morale-lifting 13-run triumph.
Picked for India’s T20 squad, Nataranjan was called up to the ODI setup as a backup for Navdeep Saini, who had complained of back spasms before the series started and went for runs in the first two ODIs. (PTI)