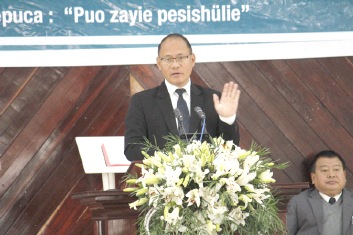 Dimapur, January 5: The yearlong celebration in commemoration of 100 years of Christianity of Kigwema Baptist Church commenced on January 4-5 at Kigwema Baptist Church.
Rev. V Atsi Dolie, executive director, Angami Baptist Churches Council (ABCC), delivering the message on Sunday morning expounded on the instrumental significance of the Ark of the Covenant as a symbol of faith and God’s presence.
He elaborated that jubilee is a milestone that bestows upon his believers a unique opportunity to built, mend, forgive and repent. He enunciated that even before a church was built, God had a mission. This mission has been entrusted upon us to fulfill.”
He further stressed that the Church must understand itself; know what the message of the Church is; and the way of organizing the Church, adding, the Church must be itself.”
Rev. Dr Neikedozo Paphino, president, Nagaland Christian Revival Church (NCRC) pointed that to commemorate the year of jubilee, the first Sunday of the year is dedicated and celebrated to declare liberty by blowing the trumpet. He described it as a time for renewal of relationship, commitment, and doing good and sharing blessing with others.
Rev. Mekhale Yhoshu, senior pastor, Kigwema Baptist Church (KBC) called to ponder on the essence of the celebration where we need to retrospect on what kind of Christians we are.
“Are we being nominal Christians, Sunday Christians, festive Christians?” he asked. “Let us live on the Christian ethics and built our faith on the rock.”
Diezeneino Phizo, associate pastor, Union Baptist Church shared that churches in a general context has made many achievements; however require to nurture its members. Missionary, as she described, is a shared work, with each one of us taking responsibility in whatever our gifts and abilities are. The speaker, here said, the prayer, encouragement are ways of helping the mission.
Visato Yhoshu, administrator, Vineyard School, Kohima stressing on the power of praising God expressed that praise has the power of bringing victory, deliverance and results in God’s blessings and towards this, he said that true praise should come from the heart and in ways and forms that is worthy of lifting his name. In his sermon, he referred to the lessons from the book of Chronicles, where a battle was led by musicians singing praise to the Lord.
Dr Akho Yhokha, executive chairman, KBC said the seeds of Christianity in the village can be attributed to American missionaries – Rev CD King, Dr SW Rivenberg, JC Tanquish brought the good news to the Angamis. He mentioned four early converts from Angami region – Sieliezhu, Kruneizu, Nisier and Saho. He also mentioned that the first converts in the village in 1920 were Lhouruya Yano and Pfungulie.
Rev. Viketuo Kiso, pastor, Kigwema CRC said that hitherto the church was constructed, the site was horrifying where unpleasant sights and sounds were heard and seen. But these unpleaseantries ceased after the Baptist Church was constructed. “I belief it was God’s plan who chose the site for which we are here celebrating 100 golden years,” the elder added.
The celebration saw the attendance and participation of church members from the village, other churches and fellowships from the village. The culmination of the jubilee will be observed in December, 2020.
(Page News Service)