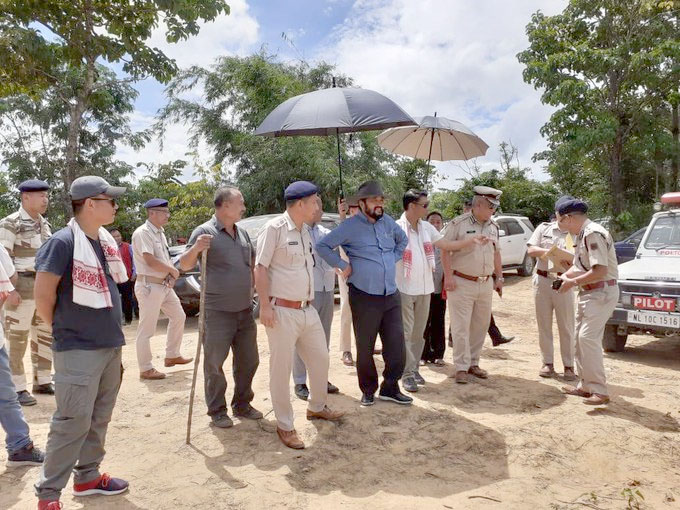 Dimapur, September 11: Nagaland Deputy Chief Minister, Y. Patton today visited the disputed Lamhainamdi village in the Peren-Dimapur district border, 5 kilometers from Jalukie town where 6 makeshift tent houses were burnt down and one church was partially damaged by unknown miscreants on September 6 morning.
The Civil Societies comprising of ZBD, ZCN, LCN, RCN, Zeliangrong Students’ Union & Lamhainamdi Village Chairman submitted a memorandum to Deputy Chief-Minister, Y. Patton with land related supportive documents.
The Deputy Chief Minister discussed preventive measures with the officials of both the district and appealed to both the warring claimants to the contentious stretch of land to maintain status quo.
Patton was accompanied by state DGP T John Longkumer IPS, Commissioner of Police, Dimapur, Limasunep Jamir IPS, Superintendent of Police, Peren District, Rukwewelo Mero NPS and other officials of both the districts to take stock of the situation which is under a highly volatile state and a likely chance of flare up by both the parties claiming ownership of the village may take place.
After the visit, Y. Patton tweeted, “Visited Lamhai Namdi in Peren district today to take stock of the situation accompanied by @DGP_Nagaland; CP Dimapur; SP Peren; Peren Admin; and other officials & discussed preventive measures. I appeal both the confronting parties to maintain Status quo”.
When Nagaland Page contacted DGP Nagaland,T. John Longkumer, he confirmed that situation in Lamhainamdi is under control and security has been beefed up in the conflict zone to contain any further flare ups.
Longkumer said, “Security forces are deployed and situation is under control and every possible measures are being taken up”. (Page News Service)