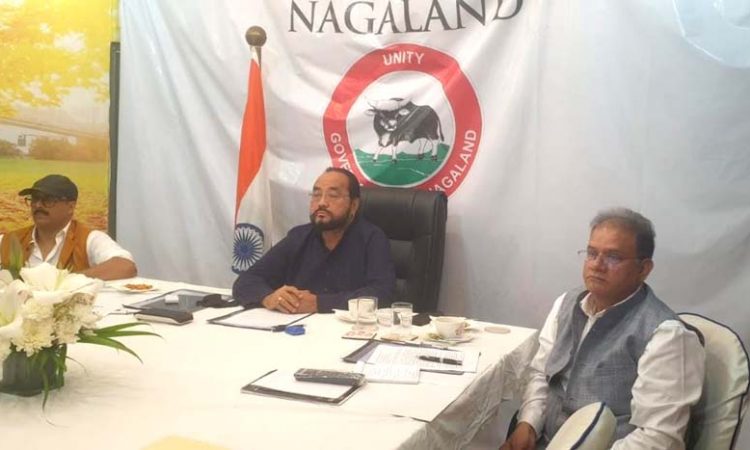 DIMAPUR, AUGUST 31: Deputy Chief Minister Y Patton today said that the revolutionary transformation of road, railways and air connectivity and infrastructural developments in the Northeastern region, economic integration through tax reforms, digital and IT programme, the Act East Policy and the Agri and Allied sector in the region is going through a great makeover although its potentiality is yet to be fully explored and realized.

Attending a virtual conference along with Chief Secretary, J Alam, at Nagaland House, New Delhi, organized by DoNER in regard to issues related to Agri and Allied Sector with all Chief Ministers of Northeastern States, Patton thanked Prime Minister Narendra Modi for giving attention to the problems of the Northeast and also congratulated DoNER Minister Kishen Reddy for taking initiatives in organizing the meeting.
He also thanked the DoNER Ministry for the issues that are being taken up with great concern and addressed in the new initiatives under various missions.
The Deputy Chief Minister also said that in the wake of COVID-19 pandemic and subsequent lockdowns, the focus is on self-reliance, re-skilling and employment avenues and generation.
He also informed that the Government has submitted an economic roadmap of 23 projects amounting to Rs 83 crores, out of which 12 projects with an amount of Rs 31 crore has been approved by North East Council.
He further stated that a project proposal to Agriculture Ministry for Naga Model Integrated settled Farming for Rs 68 crore is awaiting approval.

Another important proposal for external funding under the nomenclature of ELEMENT ~ Enhancing Landscape and Ecosystem Management Project for a total project cost of Rs 646 crore is approved by DEA, he said adding, the project has been prepared in consultation with all stakeholders including renowned NGOs like TATA Trust. He requested the DoNER Minister to help the State get the project sanctioned at an early date.
Patton informed the DoNER Minister that so far Nagaland hasn’t got any special project funded under Gross Budgetary Support (GBS) resources of the Department of Agriculture and Farmers Welfare, Government of India. He said the potential exists to fund initiatives under various missions of the State Government in running Bamboo Mission, Honey Mission and Bio Resources Mission.
On the action plan for development of palm oil in Nagaland, Patton said the State Government has taken up plantation projects mostly in foothill areas presently covering 4600 hectares in 6 districts.

He also informed that Nagaland Bamboo Development Agency has come up with a Five Years Plan 2020-2025, which contains policies, guidelines and activities during different phases to increase productivity of raw materials as well as its end products. He also stated that there is an area of expansion of Horticulture crops with export such as Pineapple, Kiwi, Naga Mircha, Bamboo Shoot, Naga Tree Tomato, Cardamom, Ginger, Turmeric and French Bean (kholar). Requirement of Cold chain development, development of supply chain and forward linkages, strengthening of post harvest infrastructures like pack house, pre- cooling units, cold room, low cost preservation and retail markets, besides promotion of common facilitation Centre by FPOs/FPCs, etc.
Stating that Nagaland is organic by default, the Deputy Chief Minister stated that the State has great potentials for cultivation in almost the entire land. He informed that so far under MOVCD- NER, it has covered 13000 ha Organic Certified areas benefiting 13647 farmers in 24 villages. Another 1000 ha will be covered in phase 2.
Patton further said that the State has welcomed the initiatives of the Union Government relating to the introduction of Agriculture Infrastructure Fund, however, it has not taken off in the State on expected lines as Banks are reluctant to finance farmers due to non-availability of collateral securities.

Chief Minister Neiphiu Rio could not attend conference due to a prior engagement.
(Page News Service)