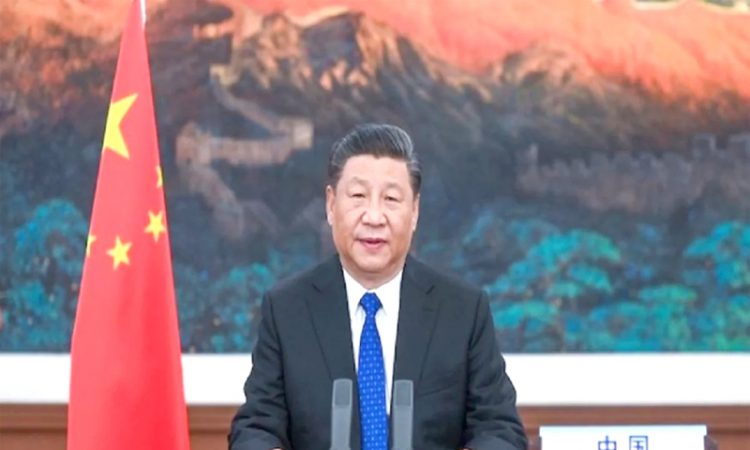 Beijing, April 20: Chinese President Xi Jinping on Tuesday hit out at the US, saying there should be no “bossing” and “meddling” in the internal affairs of other countries as Beijing is increasingly coming under pressure from Washington and its allies over issues of human rights violations, Taiwan and Hong Kong.

“Bossing others around or meddling in others’ internal affairs would not get one any support. We must advocate peace, development, equity, justice, democracy and freedom, which are common values of humanity, and encourage exchanges and mutual learning among civilizations to promote the progress of human civilization,” Xi said, without directly referring to the US.
“What we need in today’s world is justice, not hegemony,” he said addressing the annual Boao Forum for Asia (BFA), a China promoted influential think tank based in Hainan via video link.
“Big countries should behave in a manner befitting to their status and with a greater sense of responsibility,” he said.
His snide remark against Washington came as US President Joe Biden vigorously pursued a strong China containment policy initiated by his predecessor by Donald Trump.
Biden united US allies like the UK, the EU and Japan over his China policy. He also held the first quadrilateral summit of the emerging alliance called Quad which included US, Australia, Japan and India.
The US, the European Union, Britain and Canada have imposed coordinated sanctions on China over alleged human rights violations against Uygur Muslims in Xinjiang, a charge Beijing denied.
These countries have also taken united position on China firming up its control over Hong Kong with its new national security law subduing the massive pro-democracy agitation in the former British colony.
Those who attended BFA meeting including Apple’s CEO Tim Cook, Tesla’s Elon Musk, Blackstone’s Stephen Schwarzman and Bridgewater’s Ray Dalio, the Hong Kong-based South China Morning Post reported.
Xi, in his address, also called on all countries in Asia and beyond to answer the “call of our times,” defeat the pandemic through solidarity, strengthen global governance, and keep pursuing a community with a shared future for mankind.
Marking the 20th anniversary of the BFA, this year’s annual conference is themed “A World in Change: Join Hands to Strengthen Global Governance and Advance Belt and Road Cooperation.”
“Global governance should reflect the evolving political and economic landscape in the world, conform to the historical trend of peace, development and win-win cooperation, and meet the practical needs in addressing global challenges,” Xi said.
On creating a future of health and security with solidarity and cooperation, Xi said the key role of the World Health Organization (WHO) must be given full play in the ongoing fight against COVID-19.
On climate change, Xi stressed the importance of following the philosophy of green development, advancing international cooperation and doing more to implement the Paris Agreement.

Efforts should also be made to boost the digital economy, and step up exchanges and cooperation in areas such as artificial intelligence, biomedicine and modern energy, to turn the fruits of scientific and technological innovation into greater benefits for people in all countries, he said. (PTI)