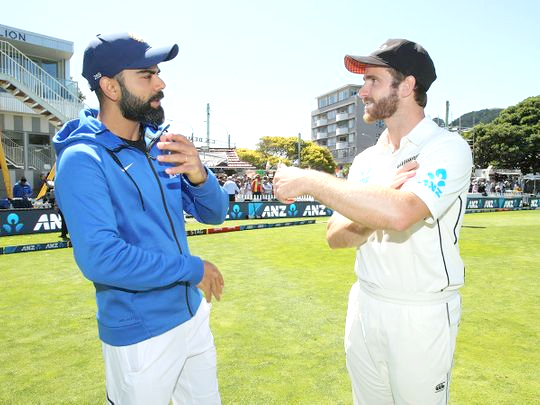 SOUTHAMPTON, June 16: An upbeat New Zealand will take on an undercooked India aiming to become Test cricket’s first official world champions when they clash in the inaugural World Test Championship (WTC) final in Southampton from Friday.

The one-off match at the Rose Bowl marks the culmination of a two-year cycle of the WTC, which was launched in 2019 to create Test cricket’s own pinnacle event.
The governing International Cricket Council (ICC) wanted the championship to bring relevance and context to Test cricket and New Zealand captain Kane Williamson said it had been a success.
“I think we saw it at the end of the competition, teams trying to push their case for qualifying which made way for a lot of exciting results,” the 30-year-old said last week.
“We saw in Australia, in New Zealand, a lot of teams had a chance to get through.”
New Zealand are looking to shed the bridesmaids tag in big finals, having finished runners-up at the last two 50-overs World Cups.
They were particularly unlucky in 2019 when England won the title via a now-scrapped boundary-count rule after the final ended in a tie even after a Super Over.
The WTC final presents them with another opportunity to become world champions and they look ready to grasp their chance, signalling their preparedness with a 1-0 series victory against England.
Particularly impressive was how the team under stop-gap captain Tom Latham, having made six changes to their squad, triumphed by eight wickets inside four days in Edgbaston.
By contrast, India have not played a Test match since March and are yet to win an ICC trophy under skipper Virat Kohli.
The importance of the WTC final was not lost on the 32-year-old.
“This holds a lot of value, especially this being the first of its kind and in the toughest format,” Kohli said before leaving for England.
“This is like the accumulation of all the hard work of not just the duration of the championship but the last five-six years.”
The WTC final could prove to be a contest between India’s star-studded batting line-up and New Zealand’s versatile pace attack armed with the fast-swinging Dukes ball.
With an animated Kohli and a phlegmatic Williamson leading their troops, the final will also be a clash of contrasting leadership styles.
The ICC is happy with how the WTC generated more interest in Test cricket.
“It was obvious that the interest in certain series wasn’t just restricted to the two teams involved,” ICC acting CEO Geoff Allardice told a virtual news conference on Monday.
“It was coming from all over the cricketing world and I think to bring that sort of context to Test cricket is a real step forward.”
I have reached here because of criticism: Ajinkya Rahane

Ajinkya Rahane doesn’t mind a bit of “criticism” but has never been too overtly bothered by what people think about his game as he goes on with his job of winning Test matches for the Indian cricket team.
Despite his blow-hot-blow-cold form over the last few years, India’s Test vice-captain with 1095 runs in 17 games is team’s top scorer in the two-year World Test Championship cycle leading to the final against New Zealand.
“It feels special,” Rahane said about emerging as the top scorer.
But what about the flak that he has faced because of poor run of scores? “I’m happy to take criticism. I feel it’s because of the criticism I’m here. I always want to give my best whether people criticise me or not.
“For me, it’s important to give my best for my country and contribute each and every time be it as a batsman or a fielder,” Rahane, who played a massive role as skipper during epic series against Australia, said.
Having played Test cricket for more than eight years, Rahane knows that public opinion is fickle and at best left alone with focus on controllables.
“I don’t really think about criticism. If people criticise me, that’s their thing, and that’s their job. I cannot control all these things. For me, I always focus on controllables, putting my best foot forward, working hard and following my process and the result follows.”
Rahane feels that even if he scores 40 and it proves to be useful for the team’s cause, he is more than happy.
“I will be playing my natural game. Winning is really important whether I score hundred or not. I don’t want to put too much pressure on myself and even if my 30 or 40 is valuable for the team, I am happy.”
The Indian vice-captain in 2019 had played for the Hampshire county and has a better idea about the ground where he has also played two Tests in 2014 and 18, both of which the visitors lost.
“I like to be in the present. I know the conditions. It’s about being in the moment, adjusting to the conditions. Also me being the highest scorer doesn’t matter now. It’s past. I just don’t want to put extra pressure and would want to play freely,” said Rahane, who has three hundreds and six fifties in this inaugural cycle of WTC.
For Rahane, the WTC final is just another game and his mental make-up is such that he is not thinking of it as the biggest event.
“It’s just a mental thing. If we can switch mentally and adapt, it’s important. Yes one off, we have to take it as another game not as a final or anything. We just want to give our best, play good cricket, be consistent in the five days.”
The likes of Rishabh Pant and Shubman Gill will be playing the biggest match of their short careers but Rahane feels it is better let them play their fearless brand of cricket with an uncluttered mind.
“Personally, I am not telling them anything. They know their game-plan. It’s about giving them freedom, backing them, believing in their abilities. We don’t want any kind of confusion.”
As it has been with Rahane over the umpteen media interactions, he dead-batted questions on team combination giving away virtually nothing.
“We are yet to decide about our combination. We still have two practice sessions left.”
While signing off, he did admit that in order to win the World Test Championship, batters will have to take up additional responsibility.

“Batters play a key role in England. The bowlers get a lot of help over here and we have a big responsibility. Everyone has a different game-plan. It’s about backing your game-plan. We will take up the responsibility as batting unit and try to achieve the team’s goal.” (Reuters/PTI)