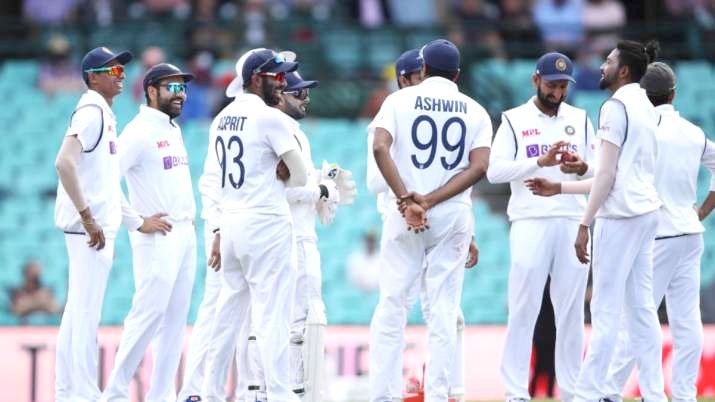 The Indian Team, after reaching London, early next month is expected to leave immediately for Southampton where it will be in quarantine during the England versus New Zealand Test match at the Ageas Bowl. /Image Source : GETTY

NEW DELHI, May 19: What happens if next month’s World Test Championship final between India and New Zealand ends in a draw? Or a tie? Or worse, a washout?.

The Indian cricket team is eagerly awaiting a response to this and other questions concerning the ‘Playing Conditions’ for the marquee clash in Southampton from June 18 to 22.
The International Cricket Council (ICC) is expected to release the ‘Playing Conditions’ in the “coming days”.
“Since this is not another bilateral series Test match, we need to know about the playing conditions. There are three basic pointers that we need to know,” a senior BCCI official privy to the Indian team’s requirements told PTI on conditions of anonymity.
“What happens in case of a draw, tie or an eventual wash-out without at least one innings of both teams not being completed,” he added.
“The ICC will be publishing the Playing Conditions in coming days. We can’t put a date but I believe they will send it soon.”
Indian team will do quarantine in Southampton during Eng vs NZ Test
The Indian team, after reaching London, early next month is expected to leave immediately for Southampton where it will be in quarantine during the England versus New Zealand Test match at the Ageas Bowl.
“Yes, India will be in Southampton only when New Zealand and England play the first of their two Tests. We expect ICC to give an idea of the duration of hard or soft quarantine in the next few days.
“Since it’s an ICC event, the final notification needs to come from them,” the source said.
The Indian team is hoping to train during its soft quarantine but negotiations are still on with regards to duration of quarantine.
Mumbai-based players will join local bio-bubble on May 2
While the likes of Mayank Agarwal, Ravichandran Ashwin, bowling coach Bharat Arun on Wednesday arrived in Mumbai on a charter flight from Chennai, Mohammed Siraj, men’s team fielding coach R Sridhar, women’s Test and ODI captain Mithali Raj will all be boarding from Hyderabad.
However, all those living in Mumbai, Pune and adjoining areas can join the team bubble on May 24 like men’s team skipper Virat Kohli, his respective red and white ball deputies Ajinkya Rahane and Rohit Sharma, and women’s team batter Jemimah Rodrigues.
Even KL Rahul, who is recovering from an appendicitis operation is in Mumbai and expected to join the bubble on May 24.
BCCI has deployed three charter flights — from Delhi, Hyderabad and Chennai — for both male and female cricketers. All those who are not in these three metro cities are supposed to take a private car and reach the destinations for their respective flights.
A few who wanted to fly commercial with their negative reports have been allowed.
“Also the rule for boarding a charter flight is that even the driver of the private car needs to be quarantined three days before the journey and have a negative RT-PCR report.
“There was no reason for this clarification but when former players, who have played at the highest level, amplify rumours on social media, you are left with no choice,” a senior official said.
“Each and every member of the men’s and women’s team are aware of travel details,” he added.
All players, irrespective of whether they are entering on Wednesday or next Monday, are expected to carry three RT-PCR negative results and there will be three more tests on alternate days.
Before boarding the flight to London, every male and female member needs to carry six RT-PCR negative results.
“The BCCI has employed a central agency that is taking care of the RT-PCR tests for both men’s and women’s teams. Most players in big cities have had paramedics visiting their respective homes to carry out the test.
“For those living in slightly remote areas, where our designated agency doesn’t have a branch, the BCCI has asked the players (male and female) to get their tests done with cost to be reimbursed immediately,” another senior official said.
Prasidh Krishna and Wriddhiman Saha have option of joining by May 24
Stand by pacer Prasidh Krishna and team’s reserve wicketkeeper Wriddhiman Saha have both recovered from COVID-19 but the BCCI will allow them to spend some time at home and get rid of the weakness that is associated with the infection.
“Both Prasidh and Saha are allowed to join a bit late as they are recovering from COVID-19,” a Board official said.
India ‘A’ keeper Kona Bharat has been added as a cover if Saha isn’t fully fit. The Andhra keeper has been a third choice in red ball cricket for quite some time now.
There was speculation that one national selector was pushing for Punjab middle-order batsman Mandeep Singh as a stand-by in case Prasidh doesn’t get fit in time.

Mumbai’s Suryakumar Yadav’s name was also doing the rounds but there was no confirmation from BCCI about such a move, which cannot even be called a like-for-like replacement. (PTI)