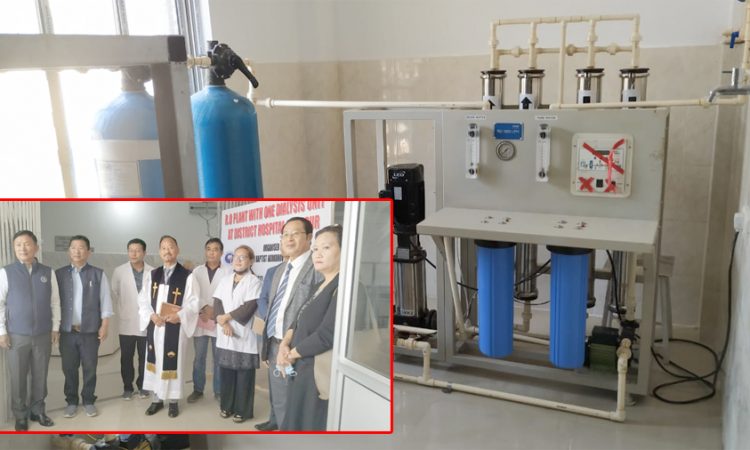 Dimapur, February 9: Western Sumi Baptist Akukuhou Kuqhakulu on Tuesday handed over an R.O. Plant and dialysis unit to District Hospital Dimapur in the presence of the members of WSBAK, Western Sumi Hoho, hospital faculty and others.

The cost for the entire project has been estimated to be Rs 19 lakh which was collected over a period of seven days between March 14 and March 22 last year.
According to Rev. Dr. Phughoto Sema, executive secretary of WSBAK who dedicated the facilities, 780 people came forward to contribute towards the initiative which he described as ‘faith venture’ and awareness about it were created via WhatsApp.
Dr. Hotokhu Chishi, a member of the Covid-19 Technical Team of WSBAK said that the team was formed in the aftermath of the Covid-19 crisis and during its task of identifying the most needed areas in Dimapur, the team discovered that the hospital lacked Intensive Care Unit (ICU) and dialysis unit and it was then that the plan was hatched. In addition to that, the infrastructure wasn’t ready to make the units functional, and so though the plan was to dedicate the units in 2020, it couldn’t become possible and only after discussion with the contractor that the equipments were installed.
He said that everyone calls Dimapur their home but it needs investment and called upon all tribes and communities to participate and justify the claim. He added that this hospital is the only place where service is free and while the units might not mean much to the rich who don’t go the hospital, for others this is a giant step. He also revealed that the R.O. unit is sufficient to suffice the needs of four dialysis units.
Later, interacting with the media persons, Dr. Chishi urged the government to make sure that no dispute with the contractors of the under-construction hospital buildings should arise which might impact the functioning of the hospital.
Dr. Keveduyi Theyo, Medical Superintendent of DHD mentioned that WSBAK also had donated besides a 1.5 ton AC unit, cardiac monitor, and other equipments.
Interacting with the media, Dr. Theyo said that presently the hospital have a make-shift ICU which will be replaced by permanent ones once the new buildings are ready and with the new one donated by the WSBAK, it also has two dialysis unit. The other one was donated by the Railway authorities.

He also revealed that while the basic things are there, it still needs two more dialysis units. Further, according to him while the hospital has all the equipments to carry out ultrasound tests, it lacks manpower to run them and radiologists are difficult to find.
With the new dialysis units ready to function, it is expected that patients can avail the service at a marginal cost comparing to the private hospitals. On an average, per session of dialysis costs around Rs 5,000 and three sessions are required in a week.
(Page News Service)