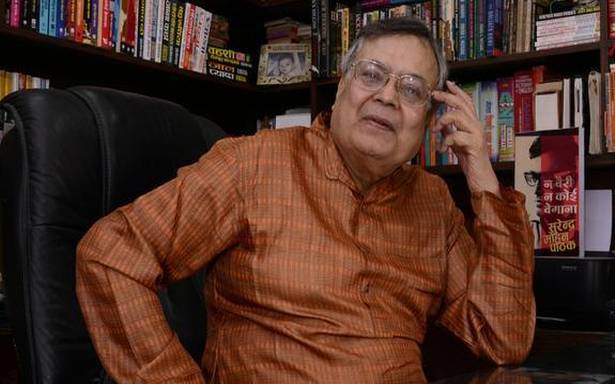 Hindi crime fiction novelist Surendra Mohan Pathak has threatened legal action against the makers of Amazon Prime Video series Mirzapur 2 for allegedly misrepresenting his novel Dhabba as sheer porno.
In the third episode of season two, veteran actor Kulbhushan Kharbanda’s Satyanand Tripathi is shown reading Pathak’s Dhabba but the voiceover has nothing to do with what is written in the novel, published in 2010, the author alleged in a letter, dated October 27.
What the character has been depicted reading from Dhabba’ has absolutely no bearing with any part of the original text of Dhabba’ and also there is no character bearing the name Baldev Raj in the novel in the said context.
On the contrary, what is being read is sheer porno, the undersigned cannot even dream of writing, supposedly to titillate the viewers. But in the process, the whole sequence is shown as an excerpt from my novel Dhabba’ which amounts to mischievous misrepresentation, Pathak, 81, claimed in his letter shared on his Twitter account.
One of the most well-known crime fiction authors in the Hindi belt, Pathak alleged that this misrepresentation was an attempt to tarnish his image of over five decades.
“I take very strong exception to this which even is a violation of the copyright act applicable to all printed material and hence I call upon you for your explanation to the above and immediate removal of the sequence from the said episode, failing which I will be forced to initiate legal proceedings against the aforesaid series and its writers, producers and the actor who was instrument to this malicious act,” he said in the letter, giving the makers a week’s time to respond.
When contacted by PTI, Pathak said he received a call from the writers of the show promising that the voiceover will be removed from the show.
I spoke to them today. They have promised me to remove the voiceover and issue an apology but they are yet to do that. The writers said they are an admirer of my work so I told them they should not have done this. The film industry is such that if you don’t stop one, many others start doing that.
They accepted their mistake saying that they had used the novel as a prop but what he was reading was as per their story. They said it did not strike them that this can be correlated. I told them that I don’t write pornography’ but my reader will think that it was a part of my book, Pathak told PTI.
Starring Ali Fazal, Pankaj Tripathi, Divyenndu Sharmaa, Shweta Tripathi Sharma, Harshita Gaur, Rasika Dugal, Rajesh Tailang, Sheeba Chadha, Anjum Sharma, Vijay Varma, Amit Sial, Isha Talwar and Priyanshu Painyuli, the show started streaming on Amazon Prime Video from October 22.