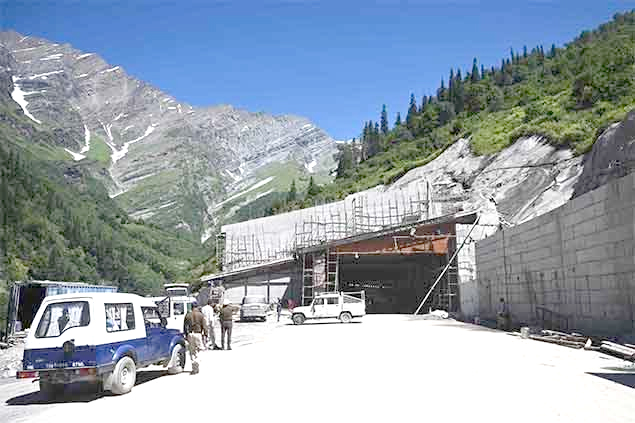 Shimla, September 20: The world’s longest high-altitude tunnel on Manali-Leh national highway is fully ready to open in Himachal Pradesh’s Lahaul-Spiti district, a senior Border Road Organisation (BRO) official said on Sunday.
The 9-km Atal tunnel built at an altitude of about 10,000 feet above sea level in Lahaul Spiti’s Rohtang is likely to be formally inaugurated by Prime Minister Narendra Modi in coming weeks, said BRO Chief Engineer, Brigadier K P Purshothaman.
‘We are ready for its opening anytime after September 25. PM may open it in the last week of this month or first week of the next month, Brig K P Purshothaman told PTI.
No official confirmation has been received so far, we may get it within a couple of days, he said, adding it is also not yet clear if it would be a virtual opening due to the corona crisis or a physical one.
The Atal Tunnel built at a cost of about Rs 3,500 crore is extremely significant from the defence point of view.
This will not only shorten the distance between Manali and Leh by 46 km but will also be beneficial for the residents of Lahaul-Spiti especially during the winter, a state official spokesperson said.
Once thrown open, the tunnel will provide all-weather connectivity to remote border areas of Himachal Pradesh’s Lahaul-Spiti and Leh-Ladakh which otherwise remain cut-off from the rest of the country for about six months due to heavy snowfall during winters, he added.
The BRO worked relentlessly to overcome major geological, terrain and weather challenges that included the most difficult stretch of the 587-metre Seri Nalah Fault zone. The breakthrough from both ends was achieved on October 15, 2017.
Brig Purshothaman said the tunnel provides a telephone facility at every 150 metre of its stretch, a fire hydrant every 60 metre, emergency exits every 500 metre, turning cavern every 2.2 km, air quality monitors every one km, broadcasting system and automatic incident detection system with CCTV cameras every 250 metre.
It is a 10.5-metre wide single tube bi-lane tunnel with a fire proof emergency egress tunnel built into the main tunnel itself.
The historic decision to construct the strategic tunnel below the Rohtang pass was taken on June 3, 2000 when late Atal Bihari Vajpayee was the prime minister. The foundation stone for the access road to the south portal of the tunnel was laid on May 26, 2002.
The Union government on December 25 last year named the strategic tunnel under the Rohtang Pass in Himachal Pradesh after former prime minister Atal Bihari Vajpayee in a tribute to him on his 95th birth anniversary.
Himachal Pradesh Chief Minister Jai Ram Thakur visited Rohtang on August 29 to review the progress on the Atal Tunnel. (PTI)