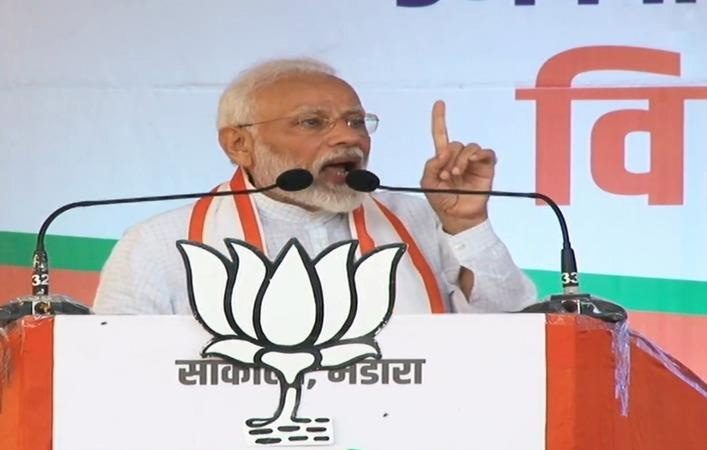 Bhandara, October 13: Prime Minister Narendra Modi on Sunday said though the world was faced with a “challenging time” India is stronger to deal with the same.
He also said the rural economy was not paid attention to earlier unlike his government has done and added that Rs 25 lakh crore will be spent on the development of infrastructure in villages.
Addressing a poll rally at Sakoli in Bhandara district of Maharashtra, Modi said in earlier days schemes were worked out on caste and community considerations. “However, for my government, only people matter,” he said, adding that farmers, the poor and deprived sections are the focus of his schemes.
The prime minister said his government was working with a new energy towards creating the identity of a “New India”, thanks to the huge mandate his party and allies received during the Lok Sabha polls held earlier this year.
“We are working new energy for creating new identity of New India. The world is faced with a challenging time now.
But India is stronger now to deal with the challenge. This is because of the trust you have reposed. This trust is inspiring us to take big decisions. Such decisions people earlier were scared of taking,” Modi said.
In the run-up to elections, the ruling BJP has been fighting the Opposition’s allegations of “failure” to revive the “sagging economy”.
In an apparent jibe at the Congress, which had mostly ruled Maharashtra since its formation in 1960, Modi said “divisive politics” has now become history in the state.
He said people had shown a “trailer” in the 2014 Assembly poll by reposing faith in the BJP-led ‘Mahayuti’, and exuded confidence that they will show the “entire film” in the forthcoming state elections, scheduled on October 21.
“Earlier, attention was not paid to the rural economy like it is now…in the coming years, Rs 25 lakh crore will be spent on developing infrastructure in villages,” Modi said.
He said roads are being developed in rural areas and godowns will be created to store grains of farmers.
“Works are being carried out on a broad vision on both irrigation and income. We have tried to change the situation and have taken steps to solve the problems of farmers permanently,” the prime minister said.
Stating that pension plan for small farmers has now been realised, Modi said his government was also focusing on providing direct benefit to farmers.
“An amount of Rs 2000 crore is already deposited in the accounts of small farmers in Maharashtra,” he added.
The PM also said his government had “historically” raised the minimum support price (MSP) for several crops, including paddy, over the past one-and-half years.
Modi also asked the audience about land ownership titles in Marathi.
“Sakolikars (people of Sakoli) Haven’t you become ‘bhuswamis’ (owners of land) from ‘bhu-dharaks (landholders)? Who made this happen which had not happened since Independence? It is the BJP government which has made it possible, right?” Modi said.
He listed schemes like livestock vaccination, Mudra, pension for labourers among the welfare measures launched by his government.
“Toilets were built, electricity, LPG cylinders and pucca houses were provided to the poor across villages in Maharashtra. Free medical treatment for the poor is a reality now,” he said.
“Our policies and strategies are for the welfare of the people and the nation…The country today has left behind days when schemes were worked out based on regions, classes and communities.
“At the centre of all our schemes — like providing toilets and free medical treatment to the poor — is the poor.
Region, caste, community are not important for us. For us, everyone he is son of the motherland. This was the sentiment of Babasaheb Ambedkar and Saint Tukaram,” Modi said.
The PM reiterated that his government had launched the “Jal Jeevan Mission” after assuming office.
Under the scheme, Rs 3.5 lakh crore will be used for water conservation and for building resources for the purpose in the coming years, he said.
“This will not only benefit paddy farmers, but it will also save time spent by our sisters in fetching water,” the PM added.
“When pure water will be made available to everyone, you and your cattle will be healthier. Industry will develop swiftly in drought-hit regions with the proper supply of water. This will provide new mediums of employment,” he added.
Tourism was also developing in India, the prime minister said.
Referring to his recent informal interaction with Chinese President Xi Jinping in Tamil Nadu, PM said the visitors were impressed by India’s culture.
Speaking about Vidarbha region in east Maharashtra, the prime minister said, “This entire region is full of jungles, lakes and streams. There is lot of scope for tourism here.”
Earlier in the day, Modi addressed a campaign rally at Jalgaon in north Maharashtra. (PTI)