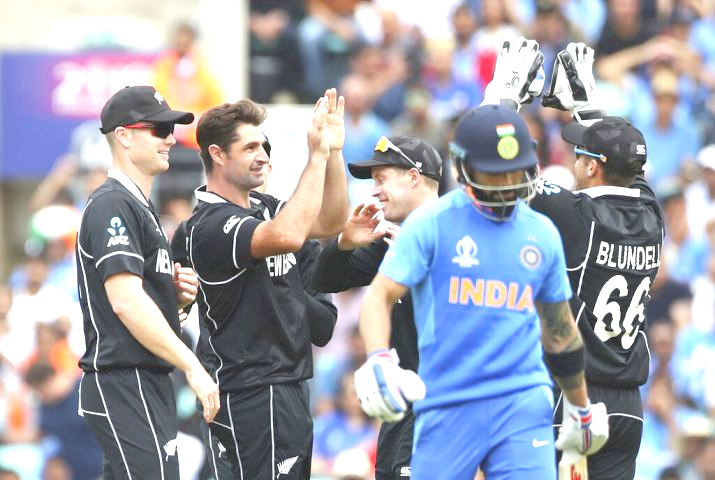 LONDON, May 25: Indian batting line-up’s soft underbelly lay exposed in slightly favourable bowling conditions as New Zealand gave a rude wake-up call, winning the first warm-up game ahead of the ICC World Cup by six wickets on Saturday.
Under overcast conditions, Trent Boult’s (4/33 in 6.2 overs) incisive swing bowling was a test of technique for the Indian top-order batsmen and the Men In Blue never recovered from an early collapse, being bowled out for 179 in 39.2 overs.
It was a walk in the park for the Black Caps as they reached the target in only 37.1 overs with Kane Williamson (67) and Ross Taylor (71) helping themselves to half-centuries.
While it was a warm-up game and the outcome of the result isn’t something that India would be bothered too much but what certainly would keep them worried is the failure to find a solution to their problems.
KL Rahul failed at No 4, Dinesh Karthik’s poor IPL form continued while Vijay Shankar and Kedar Jadhav’s respective injuries in all likelihood would prevent the team management from checking them out against Bangladesh in the second warm-up game at Cardiff.
The two wrist spinners — Kuldeep Yadav (0/44 in 8.1 overs) and Yuzvendra Chahal (1/37 in 6 overs), who have gone off the boil in the past few months — also didn’t make much of an impact.
A sub-200 total meant that Williamson and Taylor, during their 114-run stand, hardly took risk against the duo, getting run-a-ball with minimum fuss.
For India, Ravindra Jadeja’s decent show (54 off 50 balls and 1/27 in 7 overs) was the only silver lining.
There was a possibility that after IPL, played on pitches devoid of any lateral movement and conditions that didn’t aid swing bowling, the footwork would remain a touch iffy for Indian batsmen.
It was Boult’s first spell which saw openers Rohit Sharma (2) and Shikhar Dhawan (2) along with No. 4 KL Rahul (6) being dismissed that proved to be decisive in overcast conditions.
The lack of footwork was evident as Boult trapped Rohit with a delivery that darted in while Dhawan had an inside edge to a delivery that had a shade more bounce. Rahul was played on when Boult got one to rear up. On all three occasions, there was distinct lack of footwork.
Skipper Virat Kohli (18 off 24 balls) found his defence breached by Colin de Grandhomme’s off-cutter trying to play across the line.
Jadeja’s half-century ensured a 175-plus score for the ‘Men In Blue’ after being reduced to 115 for 8 at one stage. His 62-run ninth-wicket stand with Kuldeep Yadav (19) was the only saving grace for India in an otherwise disappointing batting performance.
Before Jadeja, it was Hardik Pandya (30 off 37 balls), who added 38 runs with Mahendra Singh Dhoni (17 off 42 balls) for the fifth wicket.
Dhoni’s painful stay at the crease was cut short by Tim Southee when he was caught at short mid-wicket while trying to give the bowler charge.
Dhoni, who takes time to settle down, not for once looked comfortable and failed to rotate the strike during the partnership, consuming a lot of deliveries.
It was Jimmy Neesham (3/26 in 3 overs), who dismissed Hardik with a cross-seam delivery that moved a shade, inducing an outside edge.
Hardik was promoted ahead of Dhoni in adverse conditions and he showed positive intent with six boundaries.
Dinesh Karthik was gone in the same over, flicking a half-volley straight to fine leg and it was Jadeja, who resurrected the innings with Kuldeep for company. (PTI)