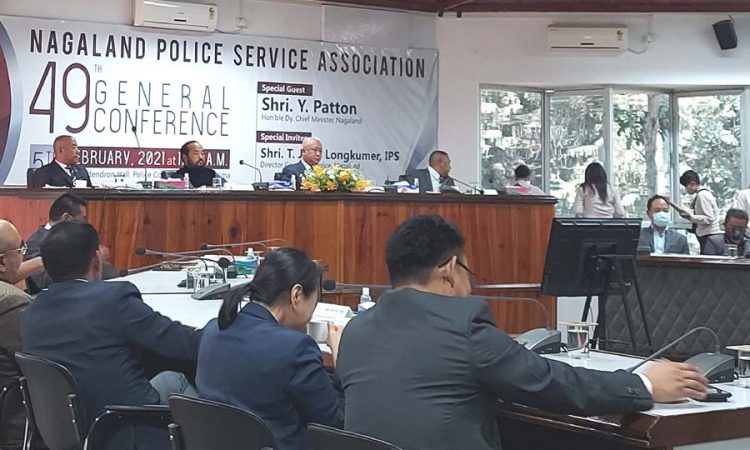 He said the Government expects a high degree of professionalism and dedication from the police and “we cannot tolerate any kind of irresponsible behaviour, indiscipline and laxity in the discharge of duties”.
Addressing the 49th general conference of Nagaland Police Service Association (NPSA) here at the Police Complex, Chumukedima, the Deputy Chief Minister said one area of serious concern in police force is the presence of some drug addicts and alcoholic personnel. “Drug addicts and personnel performing duties under the influence of alcohol shall invariably tarnish the hard earned good image of the entire force and also the officer concern, under whose command any such delinquent personnel is deployed,” he said.
“We must come up with a comprehensive legal mechanism to further strengthen the service jurisprudence to screen out such irrepressible personnel from the police force,” he stressed.
Patton said as police officers and responsible public servants, they should uphold and enforce the law of the land without favors, partiality and nepotism. He said the primary objective of each and every police officer should be to ensure creating a conducive and congenial environment in the society in which people of all walks of life can pursue their vocations without any fear and difficulties.
The Deputy Chief Minister talked about ‘explosive usages of information technology’ and said there is a need for a planned up-gradation and expertise in the field of cyber-security and cyber crimes.
“We need to understand how the information technologies are being used by the miscreants and to devise strategies to counter and contain cyber related crimes,” he said adding, policing, especially controlling organized crimes and protecting the vulnerable in the State must continue to be a focused attention of the police force.
He also urged the police officers to create a perception of just, fair and credible police in the minds of the citizens so as to reassure the sense of confidence.
Stating that the Government of the day is doing its best to bring about improvements, be it the service matters, promotions and other infrastructural and organizational requirements of the police force, Patton assured that the Government is committed to address any genuine grievance of the police force in the days to come.
He appealed to the police officers to continue upholding the confidence and trust bestowed upon them by the Government and prove themselves to be worthy of such an honour and serve the State and its people with dignity.
DGP Nagaland, T John Longkumer said past stalwarts have left a legacy in the police force since the inception of the State and police officers have shouldered all problems. He said during the most violent days, Nagaland Police have done a commendable job.
Asking the police officers to know their history, the DGP said Nagaland Police is always respected wherever they go. He cited the examples of Nagaland Police performing duties in Naxal-infested
Chattisgarh and also in Delhi.
He said today there are many challenges and everyone must be prepared for it. He said it is time for review of all the administrative gaps, to reform and how to improve the service conditions.

President of Nagaland Police Service Association, Vekhosa Chakhesang said that the general conference is held annually which provides an opportunity for serving NPS officers to congregate, share ideas for introspection and to attain the benchmark to state premier service. He said the primary objective of the conference is to deliberate important issues pertaining to grievances affecting the service conditions of the cadre officers and taking up genuine matters concerning ROP, allowances and other general interest of police force as a whole.
On the occasion, he thanked the DGP Nagaland for all out support right from the beginning till completion of cadre review. He also thanked former Chief Secretary, late Temjen Toy who was full of compassion, understanding and without any hesitation cleared the cadre review file on the day he proceeded for his treatment.
(Page News Service)