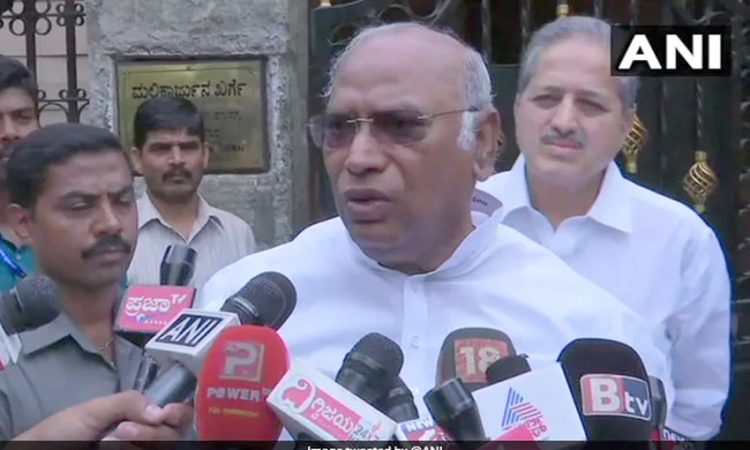 Thiruvananthapuram, February 20: Opposing the government “just for the sake of doing so” isn’t his style of functioning, new Leader of the Opposition in the Rajya Sabha, Mallikarjun Kharge said today. However, the Congress leader made it clear that there will be no compromise on issues affecting the common man.

“We are not opposing the government just for the sake of opposition. We oppose the government’s wrong policies affecting the common man,” he told news agency Press Trust of India to a query on how he would function as Leader of the Opposition.
Kharge, who became LoP (Leader of the Opposition) this week following the retirement of veteran leader Ghulam Nabi Azad, flagged the ongoing farmers’ protest demanding repeal of the three farm laws enacted by Parliament last year, “flouting all procedures” and demanded that they be withdrawn.
He suggested that the government come up with fresh proposals after withdrawing these controversial laws and refer them to a parliamentary standing committee for scrutiny.
The senior Congress leader visited Kerala on Friday to address a public meeting organised in Kollam as the Congress-led UDF’s ‘Aiswarya Kerala Yatra’, led by senior party leader Ramesh Chennithala arrived in Kollam.
The yatra is being organised to reach out to people ahead of the Assembly elections due in April-May.
Kharge, a Gandhi family loyalist, said his party leaders Sonia Gandhi and Rahul Gandhi had asked him to “highlight the issues of the poor people” on the floor of the House.
“We raise the issues (in Parliament) not to become famous. We take up the issues affecting the poor. Somebody should talk”, the senior Congress leader said.
The 78-year-old leader, with over 50 years’ experience in politics, urged Prime Minister Narendra Modi and the BJP to listen to the voices of agitating farmers and address their grievances.
“The farmers have been agitating against the new farm laws for past few months and demanding that they be withdrawn as it abolishes the MSP and the Mandi system,” he claimed, adding that, “We are all supporting their demand. The government has failed to satisfy the farmers, the major stakeholders, while bringing in these laws and should withdraw them.”
Kharge slammed the Centre on the issue, alleging that the government was using all its machinery to divide the farmers by terming them as “Khalistanis”.
He alleged that the incidents at the Red Fort on January 26 was a planned conspiracy by the government with an aim to cause divisions among the farmers, and was done to “hide its failures”.
He also criticised the government over the increasing fuel prices, saying they were doing “a great injustice” to the people.

“Petrol prices are at an all time high, while international crude oil prices have touched a record low. By hiking prices day by day, the central government is doing a great injustice to the people of this country”, he said.
Kharge also urged Kerala’s ruling CPI(M)-led LDF government to reduce state taxes on petrol and diesel to ease the burden on the people. (PTI)