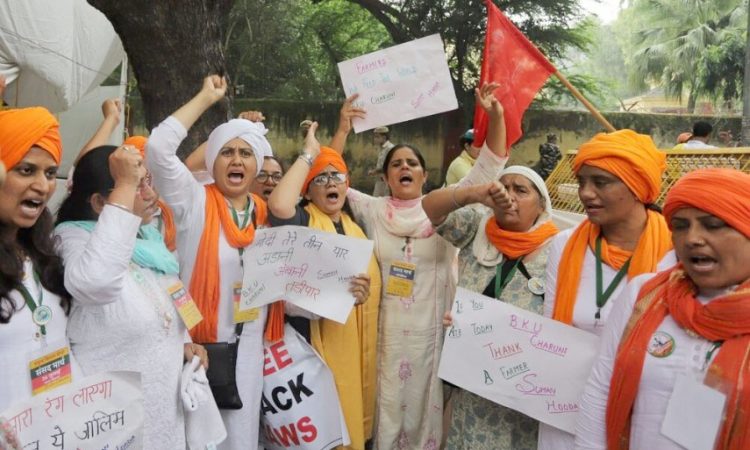 New Delhi, July 26: Nearly 200 women farmers from Uttar Pradesh, Punjab and Haryana on Monday gathered at Delhi’s Jantar Mantar for a ‘Kisan Sansad’, and demanded that the Centre’s contentious agri laws should be repealed.

They raised slogans demanding scrapping the three farm laws — the Farmers’ Produce Trade and Commerce (Promotion and Facilitation) Act, 2020; Farmers’ (Empowerment and Protection) Agreement on Price Assurance and Farm Services Act, 2020; and the Essential Commodities (Amendment) Act, 2020.
The focus of Monday’s ‘Kisan Sansad’ was the Essential Commodities (Amendment) Act, 2020, and the farmers’ demand for the enactment of a law guaranteeing remunerative minimum support price (MSP) for their crops.
The ‘Kisan Sansad’ is part of the farmers’ agitation against the agricultural laws.
As part of ‘Kisan Sansad’, farmers from the protest sites at Delhi borders, where they have been camping since November last year, have been gathering at Jantar Mantar to raise their voices against the agricultural laws while the Parliament’s Monsoon session is underway.
Delhi Lt Governor Anil Baijal has given special permission for the demonstration by a maximum of 200 farmers at Jantar Mantar, a few metres away from the Parliament complex, till August 9.

The women’s ‘Kisan Sansad’ was moderated by politician and speaker Subhasini Ali.
It commenced with the singing of the national anthem, followed by the observation of a two-minute silence in the memory of the farmers who have died during the eight-month agitation.
“Today’s ‘sansad’ will showcase the strength of women. Women can farm as well as run the country, and today everybody here is a politician,” Ali said.
Asserting that the farmers’ protest against the three “black laws” and their demand for MSP will continue, she said, “The government keeps calling us (farmers) by different names like terrorists, Khalistanis, etc. but if they have the strength, they should not eat the food produced by these terrorists and Khalistanis.”
Neetu Khanna, a farmer leader, said it is shameful that the government is “mistreating” the farmers when “they are the ones who keep the country alive”.
“I would like to put forward the demand for a legal guarantee for MSP because if we don’t have MSP, the common man will suffer,” she said.
Another participant, Nav Kiran, demanded the withdrawal of the Essential Commodities (Amendment) Act, claiming it is “anti-woman, anti-poor, and anti-common man”.

Explaining how the law is anti-woman, she said, “We have seen how the prices of cooking oil and cooking gas have gone up because of this law. It will not allow women the scope to save whatever little money they could manage to earlier from their monthly expenses.”
The Essential Commodities (Amendment) Act deregulates food items like cereals, pulses, oilseeds, edible oils, onion and potatoes by removing them from the list of essential commodities.
The amendments to the six-and-half-decade law provide that stock holding limit on commodities will only be imposed under exceptional circumstances like national calamities, famine with a surge in prices, the government had said in Parliament last year.
The government had said the amendments will boost investment in the agriculture sector and will also create more storage capacities to reduce post-harvest loss of crops.
Actress and activist Gul Panag, who also attended the ‘Kisan Sansad’, said with the Essential Commodities (Amendment) Act, the government has made the original law passed in 1955 “toothless”.

“The new law will promote hoarding and black marketing. What people are not understanding is that this new law will not affect the farmers but the middle class,” she said.
“Also, we are not interested in amendments made to the laws that were not made through due process. These laws have to be repealed,” she added.
A statement by the Sanyukta Kisan Morcha noted that two resolutions one seeking recognition of women farmers in the agri protest, and the other demanding 33 per cent representation in Parliament and assemblies, were passed unanimously by the ‘Mahila Kisan Sansad’ on Monday.
“Even though women contribute quite significantly to farming, they do not receive the dignity, recognition and status that they ought to in the country. There should be well-thought-out measures adopted to increase the role and space for women in the Kisan Andolan.
“It has also unanimously been resolved that women be given 33 per cent representation in Parliament and assemblies on the pattern of local bodies like Panchayats and Municipal Committees, the umbrella body of over 40 farm unions said. (PTI)