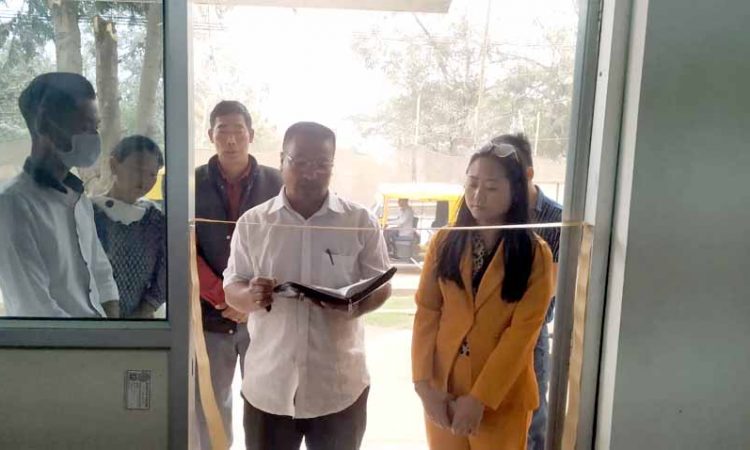 Dimapur, February 27: K. Avitoli Sumi is perhaps one of the very few women-entrepreneurs in the state who is trying to make a presence in the male-entrepreneurs dominated market of vehicle customization and selling vehicle accessories like helmets, box bags, parking covers, gloves, seat covers, top covers etc., and according to her, it isn’t easy and many people don’t see this positively.

Interacting with the media persons on the occasion of the opening of her store named “Seat Planet” here at Diphu Road, near Government College, Dimapur, Avitoli said that there is a notion to avoid shops run by Nagas among the Naga customers because of the fear of hiked prices and she is here to change it by offering better products at the existing market rates or even at lower rates.
When questioned how she is going to afford that, she said that her products come directly from the manufacturers in Pune, which helps her to afford it and makes it a win-win situation for both her stores as well consumers.
Citing examples, she said that the same helmets that is available in the market and costs Rs 3400, she can offer for Rs 2800, and the seat covers that are sold in the market for Rs 300, she is offering better quality than those at the same price.
Avitoli is the eldest among the four siblings with “lots of responsibilities” and prior to opening the store, she worked at Club Mahindra for two years and since 2019 started working in the four-wheeler customization sector in Nagaland for selected few clients. She had plans to open the store in 2020, but the pandemic disrupted her plans and the products that were supposed to reach, owing to halted transportation, remained stuck.
Before opening the store, Avitoli mentioned, she surveyed the market herself, learnt about the prices, learnt all the skills required and went to the factories in Pune and Bangalore along with her staff and did all sorts of works inside the factories so that she gets hand-on experience.
She said that she doesn’t know how she managed to set things in motion and credits God for helping her despite coming from a very humble background. Her store right now has two staffs and another is set to join soon. She wants to create more employment opportunities so that more people stay here near their loved ones instead of going out and face difficulties like during the pandemic when thousands were stranded outside the state.

“Seat Planet” was inaugurated on Saturday by pastor of St. Paul Believer Eastern Church Rev. Fr. Khaipu in the midst of a very humble gathering which included the pastor, Avitoli, her parents and her staff.
(Page News Service)