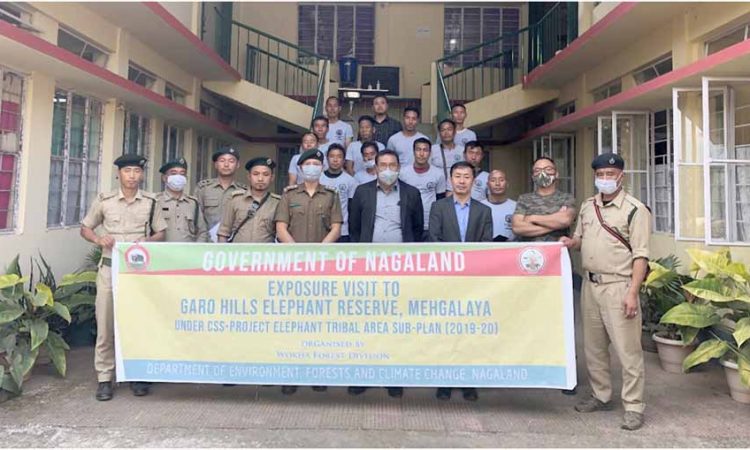 Dimapur, February 28: For many years now, villages in Nagaland, particularly those from Wokha district have been dealing with human-elephant interactions. Human-elephant interactions are complex and complicated with no single solution to the many issues that arises out of these interactions. In order to better equip farmers and villagers with new techniques and methods in managing this situation, an exposure trip to Garo Hills Elephant Reserve, Tura, Meghalaya was successfully organized by Wokha Forest Division for the farmers of Wokha District.

As per the 2017 synchronised nation-wide elephant census, Nagaland is home to over 400 Asiatic elephants. Out of this, Wokha district alone accounts for over 70% of total elephant population. As such, human-elephant interactions in the district are very frequent, often resulting in extensive property and crop damage, and at times loss of life to both humans and elephants.
The exposure trip to Garo Hills Elephant Reserve is one such step undertaken by the Forest Department of Nagaland with an aim to learn from others, while also exchanging our successfully tried-and-tested conflict mitigation measures with them.
The five-day tour program began on February 9 and ended February 13. The team comprised of 18 persons, including 12 farmers from 12 different villages namely Tsingiki, Nungying, Old Riphyim, New Riphyim, Old Changsu, Akuk, Morakjo, Okotso, Chudi, Sanis, Lakhuti, and Meshangphen. The tourwas led by Lansothung Lotha, Range Forest Officer, Baghty Range, and assisted by ZaremoKithan, Forester-I, Johnny from Wildife Wing, Dimapur and HosiaKikon, W ThungchamoKikon and Pilamo K.Ngullie from Wokha Forest Division. This tour was organized under Project Elephant and the farmers were also part of the highly effective and efficient Anti-Depredation Squad, formed under the same project.
A meeting with the officials of Wildlife Division, Meghalaya Forest Department was held on February 10 at the Forest Office Complex, Tura. S N Sangma, IFS, Conservator of Forests (CF), Wildlife, and Arpiyush Sangma, Divisional Forest Officer (DFO) Wildlife, interacted with the team from Nagaland and were briefed about various aspects with a focus on the functioning of the reserve and management of conflict situations. It was learnt that both Nagaland and Meghalaya shared a lot of similarities in terms of man-elephant interactions and the unfavourable situation arising out of it.
The Nagaland team was informed about the various interventions introduced by WTI, especially with regard to crop depredation caused by wild elephants through various programs. One such effort is the grain-for-grain program where relief is provided in the form of rice grains to farmers who have lost their crops to damage by elephants. WTI also works closely among communities and provide technical assistance to the Wildlife Wing, Meghalaya Forest Department whenever required. Balsreng Sangma from WTI was the resource person.
The team as also visited Genapara village near the Indo-Bangladesh border, where the farmers had the opportunity to interact with the farmers of Genapara village who face man-elephant interactions frequently.
Some new techniques seen were the use of Galvanized Iron pipes (2-3 ft in length) to scare elephants away. Crackers are inserted into the pipe which then creates gunshot-like noise to scare the elephants. Other methods included the use of drums to create noise, use of fire torch technique, spot-lights, etc. Farmers in the area also have strong taboo against any harm caused to wild elephants and hence, have a very tolerant perspective toward the elephants even in times of damage.
The team visited the otherwise restricted Indo-Bangladesh international border, where they were shown the multiple Wildlife Corridors all along the international fence whereby wild animals, specifically elephants could move between the two countries through their ancient corridors.

Later, the team visited SakalAduma, a tourist spot near Tura and on the fringe area of Nokrek National Park & Biodiversity Hotspot.
On completion of the tour program, the team also visited some famous and well-known places in Meghalaya. This included places such as Arwah Cave, Nohkalikai Falls, besides and Cherrapunji itself and Shillong. (Page News Service)