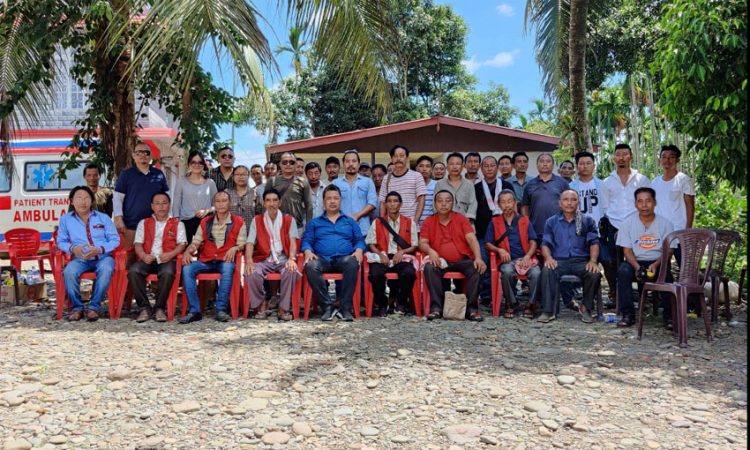 DIMAPUR, JULY 28: Joel Naga, President of the newest political party in Nagaland, the Rising People’s Party, on Wednesday claimed that people living along Assam-Nagaland border are not being able to cultivate on the lands because of the Assam Police and CRPF jawans manning the disputed areas, who have been rather aggressive lately, and even the movements of people are being closely monitored by them.

The members of the party on Wednesday had toured the Ralan area, traversing the Foothill Road to get a firsthand experience of the project, talked to the public leaders, Ralan Area Lotha Hoho as well as Ralan Area Students’ Union.
According to Joel, people in the border areas feel neglected and are dissatisfied with the Government of Nagaland when, on the contrary, the Government of Assam has been quite proactive with development projects along the border and disputed areas.
Briefing about the visit to the media persons here at Blessings Home, Mhalie Park, Dimapur, the members of the party made three demands to the Government of the day.
Firstly, RPP demanded that Nagaland must withdraw itself from the Interim Agreement of 1970, nullifying the Disturbed Area Belt, which would facilitate the State to exert its administrative power on the areas tagged disputed.
Secondly, the Party demanded that Doyang Bridge, which still has about 400 ft to be constructed, should be completed immediately along with the Foothill Road, which has been in a limbo for years now.
Thirdly, it stated that the North Eastern Areas (Reorganisation) Act, 1971 should be revisited.
The President mentioned during the interaction that it is not the time for Assam’s CM Himanta Biswa Sharma to make belligerent statements like ‘4000 CRPF jawans will be deployed along the border’, but it is time to dialogue with the neighbouring States.
Joel said that the border dispute is a Naga issue and not issues of particular tribes, and like Mizoram, the people and Government should be on the same page. According to him, withdrawing from the Interim Agreement should be common stand of all the political parties as well as the civil societies, irrespective of differences.
Member of the Working Group of RPP, Hukavi T Yepthomi stated during the interaction that to solve the boundary issues within the States of the Northeast, it is important that the North Eastern Areas (Reorganisation) Act, 1971 be revisited. He also claimed that there exist clear demarcations separating the lands of Assam and Nagaland.

Further, he alleged that there are no expenditure records for the construction of the Doyang Bridge, which, according to him, gives clear indications that the Government doesn’t know what it is doing.
Earlier, the party had toured Tzurangkong in Mokokchung district, and during the latest visit to Ralan area in Wokha district, it visited the villages of Old Ralan, New Ralan, Yanpha, Liphayan, Jandalushung A, Jandalushung B, and Jandalushung C.
(Page News Service)