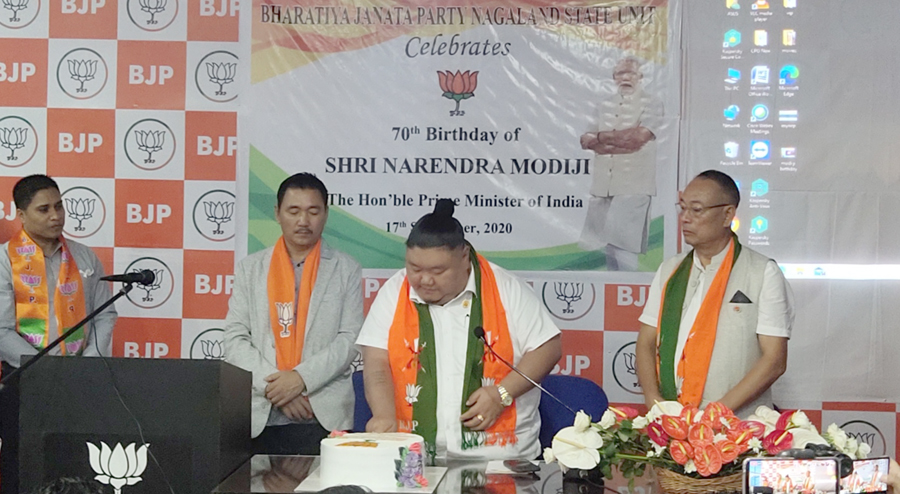 Kohima, September 17: The BJP Nagaland Unit today celebrated the 70th Birthday of Prime Minister Narendra Modi by holding a special programme at the party head office in Kohima while also conducting special camps including eye checkup, blood donation, tree plantation and hospital visitations as Sewa Saptah by its the different morchas across the State.
Conveying best birthday greetings to the PM, State BJP president Temjen Imna Along wished that Modi’s leadership continues for long and he prospers for the nation and also bring peace to Nagaland.
“May his leadership last long and build the foundation of a democratic, secular and prosperous India in the 21st century of which Nagaland will be the harbinger of prosperity for this Nation,” he said while calling upon party karyakartas in the State to remember Modi’s slogan of ‘sabka sath, sabka vikas’.
On the occasion, Along also claimed that the BJP membership in Nagaland has grown from 40,000 to 3.65 lakh in 2019 out of the 11.6 lakh voters in the State to become the largest political party in Nagaland. He appealed to BJP leaders and workers in the State to do away with the internal differences by forgiving each other to build a strong party in the State.
Naga Issue
“Nagas have been crying and yelling for years and decades for a political solution and it was on August 3, 2015 when Prime Minister Narendra Modi chose to walk hand in hand with the insurgent leaders of Nagaland and said come let’s have a Framework Agreement”.
“It is for Nagas to choose what we want and not for India or our government in Delhi to choose what they want,” said State BJP president, Along.
“We (Nagas) have so many excuses… our tribes have so many excuses while our political and insurgent workers also have so many excuses but the consistent attitude of Modi towards giving solution to the vexed Naga political problem is itself a leadership of substance,” he claimed.
Stating that Nagas always talk of inclusive and acceptable solution, he said “it is for us to be definitive and not for BJP leadership to be definitive”.
Justifying the stand of BJP Nagaland unit on the Naga political issue, Along said, “we are very definitive… our leaders are at the helm in Delhi and we are doing our best to give solution to the Nagas”.
“We have shared our opinion with them and they are our leaders… if they call us we will go but if they don’t we will not,” he said.
On ‘acceptable solution’, he said it is for the Nagas to decide how acceptable it can be. He remarked that if something is acceptable to one Naga tribe, it is not acceptable to other tribes.
“Let us not give the burden to India but take it to ourselves… let the people of Nagaland come together, be united and strong to give and receive what is acceptable,” he said.
On inclusive solution, the State BJP president said it is the ‘most difficult part’ because some want all Nagas to be included, some want only Nagas of Nagaland while some want to go away from Nagaland and create a Frontier Nagaland.
Sarcastically congratulating the Naga people, he said “how inclusiveness can be there with such attitude”.
“If we have fragmented vision, goal, attitude, desire and wants, let us not blame the Government of India led by Prime Minister Modi for not being able to give us a solution,” he said.
“We dream for stronger, opportune and progressive Nagaland, but we have to have acceptability among ourselves, honourability among ourselves and inclusiveness ourselves,” he said.
“We have fought for too long and tried too hard while also suffering for too long by being deprived too much but it is upto us to decide and choose”, he said.
‘Proud to be part of BJP’
Along also called upon pastors and reverends not to condemn BJP workers in the State without knowing their services but to come forward in correcting them wherever they go wrong.
“If we do not stand in between one of the largest sections of this nation, which comprises of Hindu and the Nagas, who comprise of majority Christians, what would be the use of the organization,” he said.
“We will take the thought process of the Nagas to the nation and bring their thoughts back home,” he stated.
People consider BJP workers as people with horns and fanatics but “we are proud to be part of BJP and today we are members of the world’s largest party with more than 17 crore members”, he said.
BJP is not a party that only thinks of politicking, he said while clarifying that politics for good governance is our goal and vision but not at the cost of our people.
He thanked the people of Nagaland for trusting the BJP leadership under Modi and BJP National President J P Nadda.
“A party with a definite leadership is a definitive party with an assertive vision for the welfare of the people,” he added. (Page News Service)