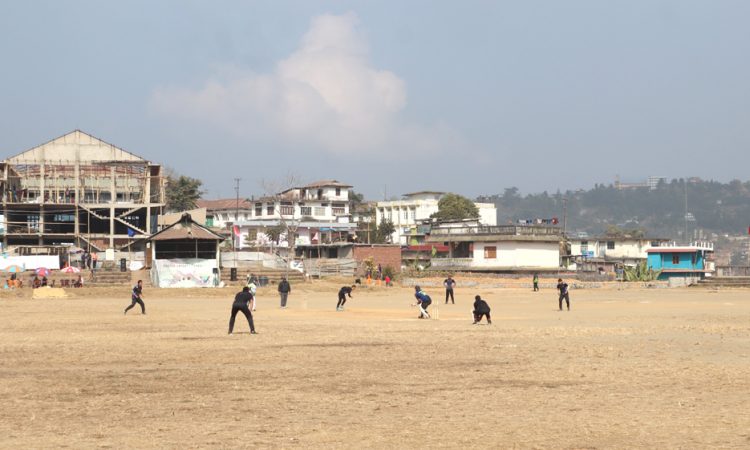 Match in action between KLSU and Tempo Cricket Club)

Dimapur, January 8: KLSU and Salix Cricket Club won their respective matches in the ongoing 25th edition of Winter Cricket Challenge played at local ground, Wokha on Friday. Both the teams qualified for the quarter finals.
In the first match KLSU won the toss against Tempo Cricket Club and elected to bat.
KLSU hitted a target of 187 runs in 20 overs while Tempo CC failed to hit the target and loss the match by 52 runs.
Shancho Sede scored 65 runs in 37 balls and was named the man of the match.
In the second match of the day New Wokha Village Cricket Club won the toss and elected to bat against Salix CC.
New Wokha Village CC hitted a target of 97 runs at 4.85 RPO in 20 overs.
Salix CC chased down the target of 97 runs and won the match by 6 wickets in 19 overs.
Man of the match award in the second match was claimed by Bipen Ngullie who scored 44 runs in 45 balls. The award was handed over by Er. Benrithung Kithan, Executive Engineer, Water Resources Wokha.
Saturday Matches
1st Match – Street Boys vs Sesame Jinx
2nd Match – Imperials vs ABC.
(Page News Service)