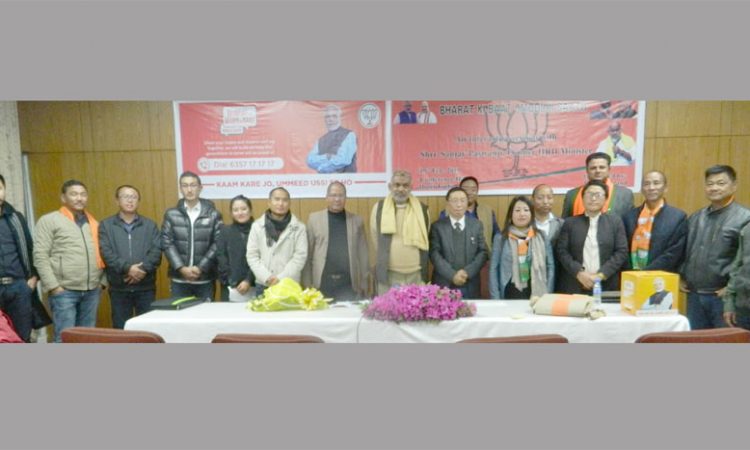 Kohima, February 19: The BJP on Tuesday assured that the vexed Indo-Naga political issue and the Kashmir issue would be resolved on priority basis under the leadership of Prime Minister Narendra Modi after the ensuing Lok Sabha polls.
Responding to queries from media persons during a press conference held at Hotel Japfu here tonight, BJP Manifesto Committee member and former Union Minister, Sanjay Paswan said, “Naga issue though not simple will be sorted out in the second regime of the BJP led NDA government”.
“Our special team of the Party, which includes BJP national general secretary incharge of North East, Ram Madav is studying the issue and I hope that the issue will be resolved after the election,” he said.
On the assurance of the Prime Minister Narendra Modi to resolve the Naga issue within 18 months, which is yet to see the light of the day, Paswan said, “Nobody can blame Prime Minister for any such lapses because he is trying honestly and sincerely and it will be sorted out in the next regime of Modi ji”.
He said the Kashmir and Naga issues are ‘two great concerns’ and will be resolved on priority basis after the Lok Sabha elections.
He also asserted that “Election for Solution” will not be another mere slogan of the BJP Party.
Asked on North East people rejecting the contentious Citizenship Amendment Bill (CAB) 2016, Paswan said, “Our party line is clear… no country in the world is ready to accept the immigrants or infiltrators”.
“We shall see that the fabric of North East shall not be disturbed,” he said, adding “My party has a sense of gratitude for the North East people because tremendously and solidly the people of the region are behind the BJP”.
“Our leaders are in touch with the people and bodies of the region to resolve the oppositions regarding the Bill,” he said.
On cancellation of the recent meeting of the Union Home Minister with NE Chief Ministers on CAB 2016, he said this is the first time in the history of the country the issue of CAB has been wrecked up while the present government has taken paradigm shift and trying in a democratic way to resolve the issue.
“We hope that the Chief Minister of the North East will come to an agreeing point and the national interest will be taken care of and BJP will come out with flying colours on the issue,” he said.
People of North East have instilled a great sense of confidence on the BJP and our plan this time is to get 100% seats of the North East
“We shall overcome all seats of North East in coordination with the NDA alliance and North East Democratic Alliance (NEDA) partners of the region,” he claimed while asserting that BJP has decided to dedicate one page out of the 12 page of the manifesto for the North East.
Sanjay Paswan, who is also the member of BJP National Manifesto Committee for LS polls, is in Nagaland to hold discussions with different section of the people including youths, students and farmers of the State and collect inputs for inclusion in the BJP manifesto.
On the issue of changing the Chief Whip of the BJP Legislature Party in Nagaland, BJP Nagaland vice president Dr Sukhato A Sema, who was also present during the press interaction, said that it was not due to any difference but just that Mmhonlumo Kikon had been the chief whip for past many years and since he voluntarily opted out and so MLA H Haiying was appointed as the new chief whip.
Dr Sema also informed that the PDA alliance has decided to field NDPP candidate for the Lok Sabha seat in Nagaland and BJP will fully support the candidature. (Page News Service)