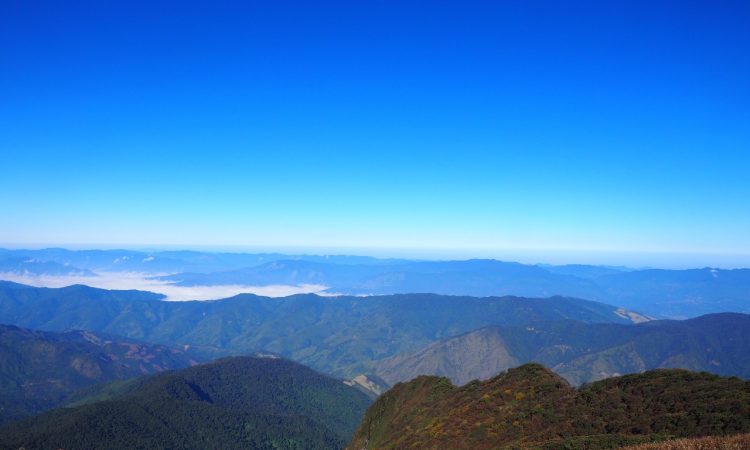 The view from the top of Mt. Khelia in Noklak district.

Temjenrenba Anichar
DIMAPUR, FEBRUARY 16: Geography texts in Nagaland could well end up undergoing a seemingly minor but significant rearrangement nevertheless, should a recent discovery at Noklak in Tuensang district find validation via an official survey.
For decades now, every primary school student across Nagaland has grown up learning that Mt. Japfu is the second highest peak in the State, next only to Mt. Saramati. Across geography textbooks in Nagaland, they are as conjoined as A and B.

However, this hierarchy of the behemoths could be on the verge of a shake-up following the entry of another lofty contender from the fringes of the Indo-Myanmar border belt.
In November last year, a Naga girl (who requested anonymity) and her team of scouts from Wui and Choklangan village scaled Mt. Khelia, one of the towering peaks that also function as a frontier between India and Myanmar, in Noklak district, to fix camera-traps as part of her research work on wildlife. She is a PhD scholar at the University of Newcastle in Australia.
At the insistence of the villagers and the scouts, she told Nagaland Page, they decided to measure the height of the mountain. When the team reached the top, they discovered that Khelia stands at an elevation of 3462 metre.
In comparison, Mt. Saramati measures 3,826 metre while the height of Mt. Japfu is reported to be 3048 metre.
Should an official survey confirm this finding, Mt. Khelia will end up getting the distinction of being the second highest peak in Nagaland. The finding has been submitted to the district administration of Noklak.
On Tuesday, the Deputy Commissioner of Noklak, Reny Wilfred confirmed to Nagaland Page that he has received the report from the Naga scholar. “We have received the letter and will be routing to the department concerned for verification,” he informed.
According to the Naga scholar, Khelia is an ‘iconic mountain’ that is shared by the villages of Wui and Choklangan, along with a contiguous forest. The Wui people call it Khe-Lia Li, loosely translated as ‘sunrays passing through the mountain’.
In Choklangan, it’s known by the name Khelia King or the ‘cold mountain’.
The mountain is home to a rich biodiversity, some of which are endemic only to the Northeast Region such as the elusive felines – golden cat, marbled cat, and clouded leopards – spotted linsang and the Blyth’s Tragopan, she shared.
Other wildlife found in the mountain consists of Asiatic wild dog, Asiatic black bear, yellow-throated marten, Malayan porcupine, leopard cat.
A species of dwarf bamboo, endemic in Nagaland and Manipur, is also found in the mountain, she informed.
According to her, Choklangan and Wui are some of the farthest villages of Nagaland bordering Myanmar.
“Choklangan is picturesquely nestled between the hills. The village is known for handicraft, basket-weaving and making nettle plant cloth. Wui is the blacksmith village, known for its traditional machetes,” she shared. (Page News Service)