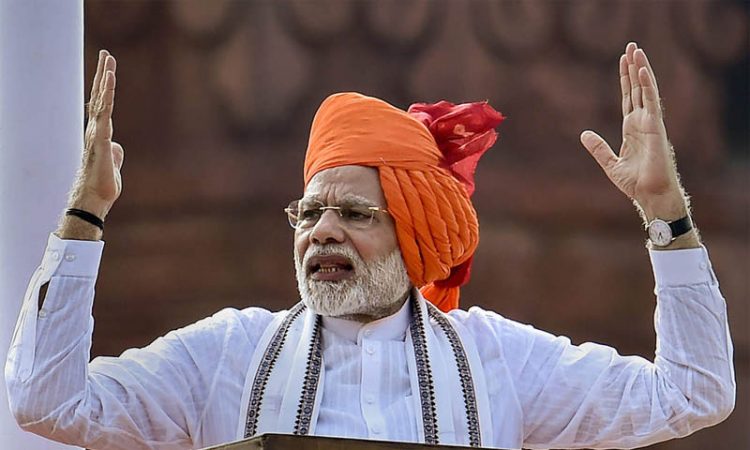 NEW DELHI, March 4: Prime Minister Narendra Modi today reiterated that terrorists will not be spared, no matter where they hide. The reprisal would not be long in coming, he said a week after the Indian Air Force targeted a terror camp of the Jaish-e-Mohammed in Pakistan’s Balakot.
The IAF strike took place just 13 days after a Jaish suicide bomber targeted a convoy of the Central Reserve Police Force in Jammu and Kashmir’s Pulwama, killing 40 men.
Speaking at a public function in Ahmedabad, PM Modi today said, “It is my nature to give a fitting reply… Ab ghar mein ghus ghus ke marenge. (we will enter their homes and eliminate them)… Even if they hide deep under the Earth, I will drag them out and eliminate them”.
“It is our policy to hit enemies inside their territory… I don’t like to wait for long,” he added.
Slamming the opposition, which has accused the ruling BJP of using the air strikes to garner votes, the Prime Minister said, “Was there any election when we conducted the surgical strike for the first time? We have been affected by terrorism for the last 40 years… I don’t care for power. I am only concerned about my country’s security.”
The first surgical strikes were held in 2016, days after a terror attack on a CRPF camp in Jammu and Kashmir’s Uri.
The response to the attack in Pulwama has become the newest flashpoint between the government and the opposition.
The opposition allegation against the BJP has been fuelled by moves of leaders like BJP’s BS Yeddyurappa and Manoj Tiwari. Over the weekend, Manoj Tiwari was targeted for wearing an Army jacket to a political rally. Mr Yeddyurappa was heard talking of the number of seats the BJP could win after the air strikes. While the former said he is proud to wear the colours of the army, Mr Yeddyurappa said he had been quoted out of context.
Several opposition parties have also questioned the government on the air strikes. Bengal Chief Minister Mamata Banerjee questioned how many terrorists have died in the air strikes. Congress’s Kapil Sibal and Digvijaya Singh asked for evidence.
“Is this the way you are serving the national interest? You may question me on my policies. You may not trust me, but at least trust the armed forces. Don’t raise questions over their valour,” the Prime Minister said today.
PM Modi and his party have been livid since a joint resolution of 21 opposition parties, which after meeting last week, had accused the BJP of for “blatant politicisation” of the sacrifices of the armed forces. PM Modi and other senior leaders of the BJP have said the allegation was being used by Pakistan to bolster their own claims about New Delhi’s motives. (ndtv)