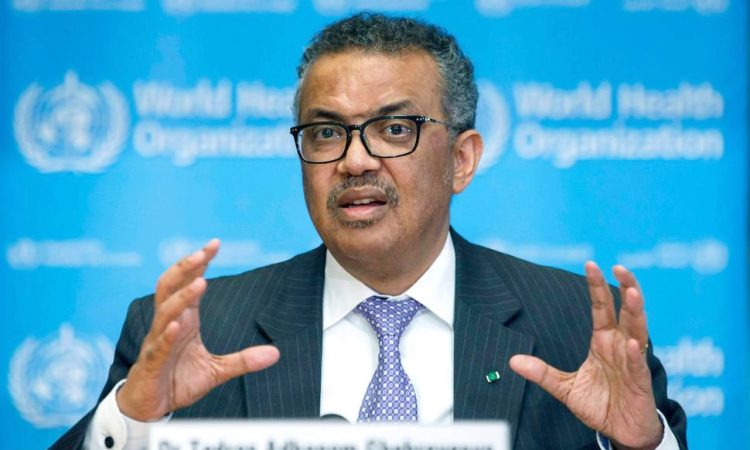 FILE - In this Monday, March 9, 2020 file photo, Tedros Adhanom Ghebreyesus, Director General of the World Health Organization speaks during a news conference, at the WHO headquarters in Geneva, Switzerland. When the World Health Organization declared the coronavirus a pandemic one year ago Thursday, March 11 it did so only after weeks of resisting the term and maintaining the highly infectious virus could still be stopped. A year later, the U.N. agency is still struggling to keep on top of the evolving science of COVID-19, to persuade countries to abandon their nationalistic tendencies and help get vaccines where they’re needed most. (Salvatore Di Nolfi/Keystone via AP, file)

Geneva, April 9: The head of the World Health Organisation said that over 87 per cent of the more than 700 million doses of coronavirus vaccine that have been administered worldwide have been given in wealthier countries.

WHO Director-General Tedros Adhanom Ghebreyesus said that on average, one in four people in rich countries have received at least one dose of a COVID-19 vaccine, compared to only one in 500 people in low-income countries.
There remains a shocking imbalance in the global distribution of vaccines, Tedros said during a media briefing Friday.
He called COVAX, the UN-backed initiative to distribute vaccines fairly, a strong mechanism that can deliver vaccines faster and more efficiently than any other mechanism. He noted that COVAX so far has delivered about 38 million doses worldwide, or enough to cover about 0.25 per cent of the global population.
Tedros criticised countries thaet plan to donate vaccines directly to other nations instead of going through COVAX.
These bilateral arrangements run the risk of fanning the flames of vaccine inequity, he said, without explaining why donations that bypass COVAX were problematic. (AP)

Oli-led Govt. loses majority support in the House of Representatives