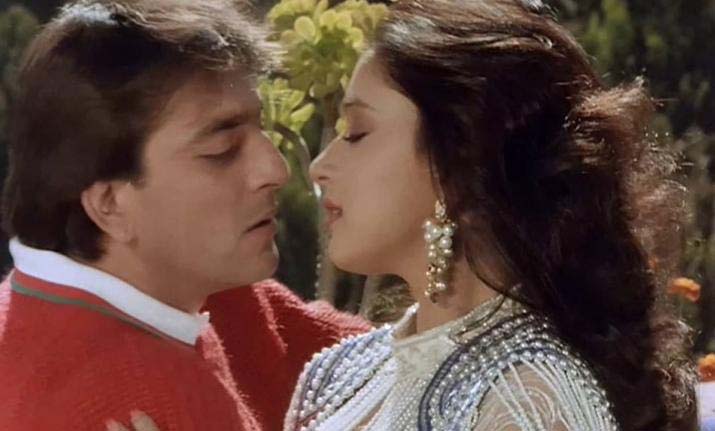 “How many women have you slept with?” “308. Excluding prostitutes.”
That’s how many girls Sanjay Dutt has had relationships with. But amid all of them, it was his affair with Madhuri Dixit that became the talk of the town in the early 90s. A lot was written about the Sanjay Dutt-Madhuri Dixit love story back in the day, but the two have mostly maintained silence on the subject.
The rumours of their proximity were flowing fast in 1993. If films like Saajan and Khalnayak were establishing them as one of the most popular on-screen jodis, their off-screen romance was also grabbing eyeballs. So much so that the rumours of their marriage spread like wildfire.
Sanjay even spoke to a magazine about this ‘affair’ with Madhuri. He told the magazine quite categorically, and with a ‘straight face’ that there was ‘nothing’ between him and Madhuri.
“I wish I had a scene going with Madhuri. But I don’t!” Dutt said, when asked if he was implying that he and Madhuri were not dating.
However, things took a U-Turn after Sanjay Dutt was arrested under the provisions of the Terrorist and Disruptive Activities (Prevention) Act (TADA). Madhuri immediately denied any kind of involvement with Sanjay after his arrest.
For the longest time, Madhuri and Sanjay not just avoided each other in public, but also evaded questions on each other. While Madhuri has maintained a stoic silence all these years, Sanju baba has often expressed his admiration for Madhuri.
In fact, in 2017, at an event, Sanjay Dutt was asked which actress would he want to marry, if given a choice today. The 58-year-old actor without any hesitation said, “I would like to marry Madhuri Dixit.”
And now more than two decades later, Sanjay and Madhuri are reuniting on the big screen with Karan Johar’s Kalank.
But before that a biopic on Sanjay Dutt is set to hit the screens. Buzz has it that Hirani hasn’t mentioned Sanjay and Madhur’s rumoured affair in the biopic. There were rumours that Madhuri had asked the makers to not feature her in the film.
However, she later rubbished the rumours saying, “For where I am today, this [the topic of Dutt] has become redundant. Life has come a long way since then. I don’t know where these reports are coming from. In any case, it doesn’t make a difference to me.”