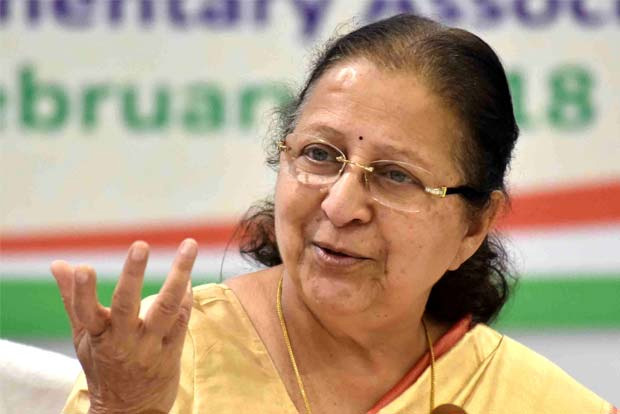 New Delhi, December 7: Lok Sabha Speaker Sumitra Mahajan on Friday said the media in India paints a gloomy picture of issues like women’s safety and that the reality was different. Addressing the 51st convocation of the Indian Institute of Mass Communication (IIMC), she also rued that newspapers and TV channels give space only to protests inside Parliament but ignore debates on important issues.
“Don’t women travel on roads… then people say women are not safe in India. When I go abroad, people ask me ‘what’s happening in India, madam. Your country is not safe now’.
“I tell them that for the last 75 years I am in India, nothing has happened to me, my daughter or daughter-in-law. There’s nothing like that. It happens in your country also… in every country,” she said.
“Yes, people commit crimes. But, is that only crimes are happening and nothing else? Politically, is only abusive language being used or something significant is also being spoken about,” Mahajan asked.
She appealed to the media to introspect on what needs to be served to society and what is the aim of the news they’re publishing.
“The skill needed to analyze a situation is a must have for aspiring journalists,” she said.
Mahajan said people usually say that the level of discourse in Parliament has plummeted but this is because the media chooses to ignore issues of significance.
“Do mass communication students think that no discussions or debates take place in Parliament at all. This is not the reality. Discussions do take place, but many a time newspapers don’t even carry the good things being spoken about in Parliament,” she said.
Mahajan also cited the example of the praiseworthy reportage on the September 11 attacks by the US media and said the Indian newspapers and television channels should learn from American counterparts.
“Thousands of people died in the attack. A lot of blood was spilled, and there must have been gory scenes, but not a single such photo appeared in the newspapers,” she said.
She also expressed disapproval of many crime reporters filing stories just based on the information they receive from police stations. “Is it the right thing to do? Do you know the entire story?” she asked.
Mahajan advocated the use of local languages for effectively communicating a message.
“There is a need to promote the use of local languages in mass communication. A push is needed in this direction. Only English and Hindi won’t do,” she said.
She told students that “package of life” is more than “pay package” and asked them to focus on building a character while they scale the heights of journalism.
On the occasion, Mahajan awarded diploma in journalism in Urdu, Sanskrit, Marathi, Malayalam, Hindi, and English to the graduating students of the institute.(PTI)