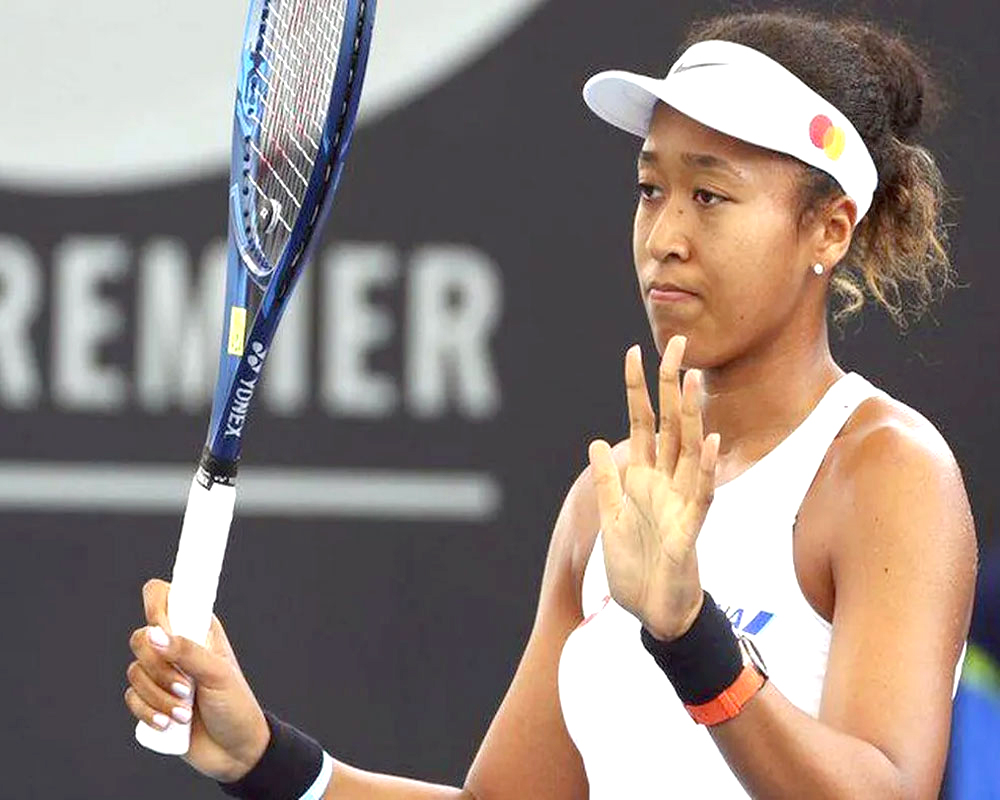 New York, August 27: World number one Novak Djokovic cruised into the semi-finals of the ATP and WTA Western and Southern Open on Wednesday while Japan’s Naomi Osaka withdrew to protest the shooting of a black man by police in Wisconsin. Djokovic, who launches his bid for a fourth US Open title and 18th Grand Slam crown on Monday, needed only 62 minutes to rout Germany’s Jan-Lennard Struff 6-3, 6-1.
The 33-year-old Serbian, who seeks a fourth US Open title and 18th Grand Slam crown, advanced to a Thursday semi-final against Spain’s Roberto Bautista Agut, who upset defending champion Daniil Medvedev, last year’s US Open runner-up from Russia, by 1-6, 6-4, 6-3.
Djokovic had no issues with a prior neck injury, testing himself well on the Flushing Meadows hardcourts in the same spectator-less Covid-19 bubble quarantine atmosphere where the US Open will be played.
“It was great. I feel very good,” said Djokovic who is 21-0 this year.
“Started a little bit tight the opening couple of games of my service games. Managed to defend well.
“Ever since that first break early in the first set, I never looked back. I really played very aggressive when I have a chance. I was playing my shots. I was very pleased with my serve.”
Fourth seed Osaka, a two-time Grand Slam champion, rallied to defeat Estonia’s Anett Kontaveit 4-6, 6-2, 7-5 in a quarter-final.
But she withdrew from her Thursday semi against Belgian 14th seed Elise Mertens, who eliminated American Jessica Pegula 6-1, 6-3.
The move came in the wake of African-American Jacob Blake being shot in the back on Sunday in Kenosha, Wisconsin.
– ‘Sick to my stomach’ –
“Watching the continued genocide of Black people at the hand of the police is honestly making me sick to my stomach,” Osaka posted in a Twitter statement.
“Before I am an athlete, I am a black woman. And as a black woman I feel as though there are much more important matters at hand that need immediate attention, rather than watching me play tennis.
“I don’t expect anything drastic to happen with me not playing, but if I can get a conversation started in a majority white sport I consider that a step in the right direction.”
Mertens reached a Friday final against the winner between two-time Australian Open winner Victoria Azarenka of Belarus, who beat Tunisia’s Ons Jabeur 7-6 (11/9), 6-2, and Britain’s Johanna Konta, who beat Greece’s 13th-seeded Maria Sakkari 6-4, 6-3.
The other men’s semi-final will send Greek fourth seed Stefanos Tsitsipas, who advanced down 5-6 when American Reilly Opelka retired, against Canada’s Milos Raonic, who defeated Serbian Filip Krajinovic 4-6, 7-6 (7/2), 7-5.
Djokovic won this event, typically played in Cincinnati, in 2018 after five prior finals losses and looks like he could claim a second title in three tries while warming up for the US Open and testing the improvements made to his games since the COVID-19 shutdown.
“Everything was worked on in the last six months,” he said.
“Looked into what can be upgraded. I worked on every single shot. It’s good that it’s paying off so soon after the break. Hope to keep it going.”
Bautista Agut, ranked 12th, fought back after being blasted in the first set.
“It was a fantastic comeback for me,” he said. “I had to fight a lot to stay there in the second set. It was a really tough match. I’m glad to get through.”
His reward is an on-form Djokovic, who has won five of the past seven Grand Slam titles as he chases Roger Federer and Rafael Nadal — both absent from the New York bubble — for the all-time Slam title record.
“He’s very solid. I’ll try to play my best game against him,” the Spaniard said. “If I can play a good level, it’s going to be a good match.” (AFP)