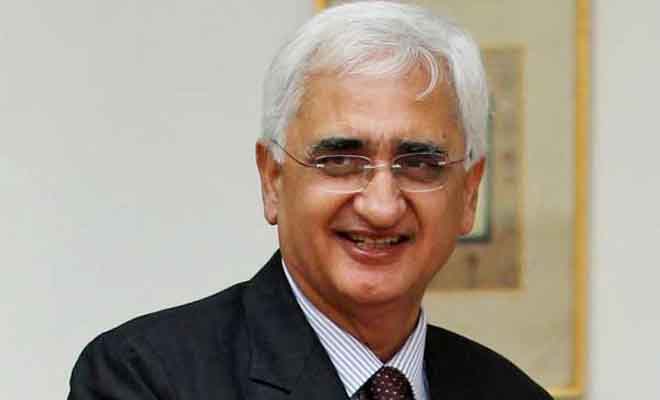 Bengaluru, May 17: Senior Congress leader Salman Khurshid wants his party to think big like the BJP, and refuse to accept “pessimistic view” that the outfit has now become too small, weak and cannot regain its lost ground.
“One take-away that I have from (West) Bengal and Assam (Assembly elections) is: You should never, never accept that you are too small, you are too weak and that you can’t make it big in a particular region or State”, he told P T I in an interview on Monday.

“I think, BJP has done that (think-big strategy) where they had no existence at all. They tried to do it in other places where they still don’t have any existence,” Khurshid said.
The Congress, the former Union Minister insisted, should not accept the “pessimistic view” that it has lost too much ground and it cannot now regain.
“I think with determination and confidence, we can and that’s what we should do.”
Khurshid agreed with analysis in some quarters that there was tactical voting in the recent Assembly elections in West Bengal, where the Congress and the Left were “wiped out”.
“That’s true. One analyst said the extent of tactical voting that happened in Bengal may not have happened in Assam but obviously tactical voting happened in both the places,” he said.
“…what do you do with it (tactical voting) as a party for the future, it’s something that we will have to consider”.
Khurshid was asked about his take on assessment by some of his party leaders who blamed a tie-up with Indian Secular Front contributing to the rout in West Bengal and those who claimed that the partnership with AIUDF cost the party dearly in Assam.
“Whenever you don’t succeed, this is the kind of explanation that you are given; when you succeed, you are given a different explanation,” he said.
“So, I don’t think post-hoc explanations are sensible although they help you analyse your decision-making process and merits of that decision. All I can say is: much can be said on both sides.”
Khurshid also said that the Congress manifesto for Assembly elections in Uttar Pradesh, due next year, would be a manifesto “from amongst” the people.
“Idea is to be a little more analytical about what is it that people want and see if we can give it,” he said.
Khurshid added: “Of course, we continue to face that problem of irrational division along castes and communities, and that will get resolved over a period. That (the division) can’t be something which can be wished away. It will get resolved over a period.”
In the Assembly elections, the results of which were declared on May two, the Congress was decimated in West Bengal, where the Trinamool Congress won with a tally of 213 of 294 seats.

The Congress also failed to defeat incumbent governments in Kerala and Assam.
In Puducherry, the party was defeated by the NR Congress-led National Democratic Alliance.
However, in Tamil Nadu, the Congress was a constituent of the winningDravida Munnetra Kazhagam-led alliance. (PTI)