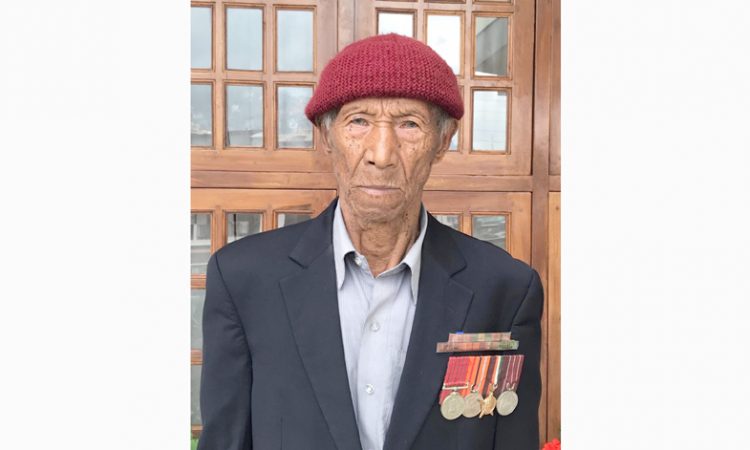 Kohima, January 9: Havildar (Rtd) Dazo Angami (Sohuyi Sazo), a war veteran of the 1969 Indo-Pakistan war, Ashok Chakra Medal, Sangram Medal, Poorvi Star Medal and 25th Indian Independence anniversary medal awardee passed away on January 9 after a brief illness at his private residence, Rukizu in Pfutsero under Phek district. He was 84 and is survived by one son, three daughters and host of grandchildren.
The war veteran was born in 1934 at Phusachodu village. His father late Murhachu died when he was still very young and was brought up as a foster child by his uncle late Pohu Sazo.
Late Hav. Dazo Angami joined Assam Police at the age of 14 years as a constable in Dergaon, Assam on August 10, 1948. Later he left Assam Police and went to Shillong where he got recruited into Assam Regiment in 1958. He was first posted in Sikkim Bn and later on transferred to 6th Bn of Assam Regiment in 1962.
When the Indo-Pakistan war broke out in 1969, he was posted to the frontier areas bordering to East Pakistan (now Bangladesh) from 1969 to 1972. He participated in the Indo-Pakistan war and was in the forefront from November-December 1971. During the war he was posted in various places – Halley, Lalmati, lsordy, Sylhet to name a few.
After actively serving the regiment, he retired from his service in 1974 in the rank of Havildar. He was decorated with a number of medals for his proficiency in the service-the Ashok Chakra Medal, Sangram Medal, Poorvi Star Medal and 25th Indian Independence anniversary medal. (Page News Service)