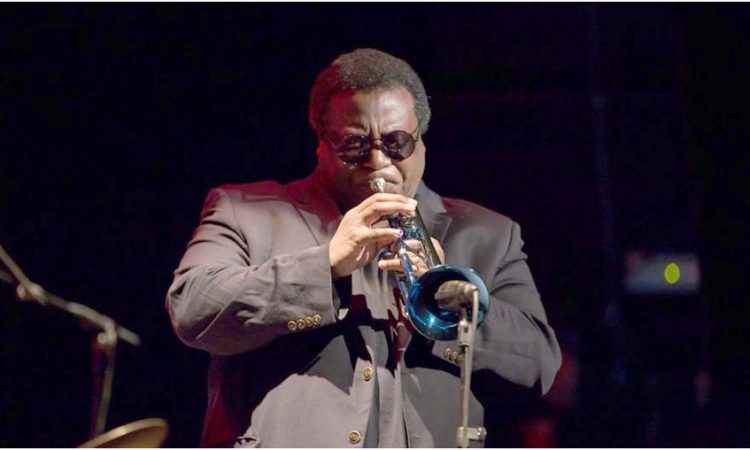 Wallace Roney, a virtuoso trumpeter whose term as Miles Davis’ only true protégé opened onto a prominent career in jazz, died Tuesday in Paterson, New Jersey. He was 59.
The cause was complications of the coronavirus, his fiancée, Dawn Jones, said.
By the time he linked up with Davis, Roney was already a leading voice in what came to be called the Young Lions movement, a coterie of young musicians devoted to bringing jazz back into line with its midcentury sound. And he was already associated ~ sometimes distressingly so ~ with Davis’ legacy. Many dismissed him as a musical clone: ravishingly talented but lacking the necessary distance from his idol to claim creative agency.
Yet as his career went on, Roney managed to neutralize most of those criticisms. His nuanced understanding of Davis’ playing ~ its harmonic and rhythmic wirings as well as its smoldering tone ~ was only part of a vast musical ken. His playing bespoke an investment in the entire lineage of jazz trumpet playing.
And in Roney’s compositions, most of the ideas began at the center of jazz’s mainstream language and cut a path outward, often by way of funk, hip-hop, pop, Brazilian or Afro-Caribbean music.
Roney made nearly 20 albums as a bandleader, including 3 for Warner Bros. at the peak of the Young Lions era, all grounded in his unshakable linguistic command and his appetite for harmonic adventure. His recordings for Muse in the late 1980s and early ’90s ~ especially his 1987 debut, Verses ~ featured a mix of A-list jazz musicians from Roney’s generation and the one before, and they established him as a premier young bandleader.
In his New York Times review of a 1988 concert by drummer Tony Williams’ quintet, Jon Pareles singled out Roney as “the standout soloist, bitingly articulate at fast tempos and lucidly melodic in gentler passages.”
Profiling Roney in The Washington Post in 1987, James McBride ~ who later became a prize-winning novelist ~ declared: “His name is Wallace Roney III. He is 27 years old. He is from Washington, and he is one of the best jazz trumpet players in the world.”
The 2 albums that Roney released in the early 2000s, immediately after leaving Warner Bros., were among his most memorable, and more formally ambitious than his early work. They represented a flush of creativity after years of frustration under contract to a label that often imposed unwelcome creative demands.
On No Room for Argument (2000), released on Stretch Records, Roney struck a nimble balance between historical reverence and futurist adventure, pairing a synthesizer with a Fender Rhodes electric piano and, at one point, mashing up parts of John Coltrane’s A Love Supreme with Davis’ Filles de Kilimanjaro. Its follow-up, Prototype (2004), for High Note, featured different sorts of homage: separate reworkings of the titular OutKast ballad and Al Green’s Let’s Stay Together.
Roney won a Grammy in 1994 for his participation in “A Tribute to Miles,” filling the trumpet chair alongside the 4 supporting members of Davis’ second great quintet: Tony Williams, Wayne Shorter, Herbie Hancock and Ron Carter. All were younger than Davis ~ and indeed, throughout the latter half of his career, Davis worked almost exclusively with junior musicians. But before meeting Roney, he had never agreed to mentor another trumpet player.
Struck by Roney’s performance at a 1983 tribute concert at Radio City Music Hall, Davis invited the young trumpeter to join him at his home in Manhattan the next day. A close friendship blossomed between the 23-year-old upstart and the ailing elder, one that culminated in a momentous performance at the 1991 Montreux Jazz Festival, just months before Davis’ death. It was the only time Davis publicly revisited material from his back catalog.
With Quincy Jones directing, the 2 trumpeters stood shoulder to shoulder in what would become a timeless piece of post-classic jazz iconography. Davis, wizened and wire-thin, hunched over a music stand alongside his burly young protégé, who picked up the slack whenever his idol missed a note.
“A lot of people like to say, ‘Yeah, well, I hung with Miles, but we never talked about music,’ ” Roney said in a 2016 interview. “Well, guess what? I did. I loved him because of his music, and he talked to me about music all the time. You definitely had to earn Miles Davis’ respect, and not everybody could do that.”
Roney remembered that Davis ~ whose birthday was just one day apart from his ~ had once told him, “You look at me just like how I used to look at Dizzy,” referring to his own mentor Dizzy Gillespie.
(NYTNS)