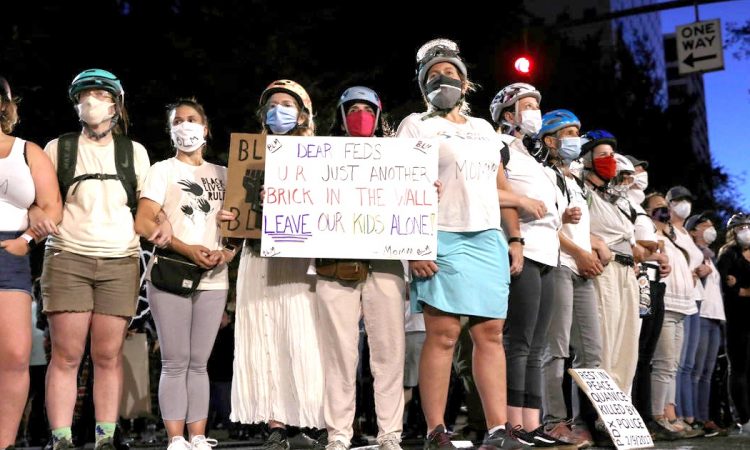 PORTLAND, JULY 21: A group of over 30 women formed a human barricade to protect hundreds of protesters from federal officers during a demonstration against racism and police brutality in Portland.
Several women joined the ‘Black Lives Matter’ demonstrations in downtown Portland on Saturday and Sunday, forming a human chain or ‘wall of moms’, to shield protesters from federal agents.
Mothers participate in a demonstration outside the Justice Center. (Picture credit: Reuters)
Videos and pictures shared on social media show several women dressed in white and wearing bike helmets chanting “Moms are here, feds stay clear”.
The women were also seen holding signs with messages like “Angry mama bear BLM” and “Mums are pissed.”
Bev Barnum, a 35-year-old from Portland, reportedly organised an event on Facebook, “calling all moms to do what they do best – protect people”
The women reportedly stood for hours outside a courthouse on both Saturday and Sunday before they were dispersed by federal agents using tear gas and batons.
US President Donald Trump and his administration deployed federal agents last week to tackle protests in some cities that have been on for more than 50 days following the death of George Floyd in Minneapolis.
However, the use of federal agents has caused tensions to escalate as local bodies and demonstrators claimed agents have been overstepping their rights and using force on peaceful protesters.
(IE with agency inputs)