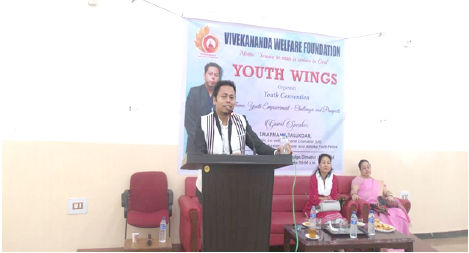 Dimapur, November 3: Vivekananda Welfare Foundation on Sunday organized a Youth Convention, commemorating the first anniversary of the formation of the ‘Youth Wing’ under the theme ‘Youth Empowerment- Challenges and Prospects’ in which Swapnanil Talukdar, known for his invention of a page turning machine for differently abled persons, was the guest speaker.
Swapnanil, who also is the academic coordinator and counselor of Livingstone Foundation International, on the occasion, narrated his story from early childhood, the challenges he faced, and how he was able to make the innovations despite not being one of the brightest students and encourage the attendants.
He said that there are opportunities and ideas everywhere, and it is required for everyone to knock on the doors and questioned how many are there who are ready to pick even one small idea, that has the potential to make a revolution, and work towards take it to the masses.
Admitting that he never had a mentor who could tell him whether he could do something or not, he said that it is the challenge that the youths face- the lack of mentors, but often, not having a mentor relieves one from being remained in a limited space, and to have one or not can be both challenging as well as a matter of prospect.
K. Ela, Director of Prodigals’ Home who was also one of the speakers in her speech commented that in the state, many of the youths lack inspirations and models and they are confused and frustrated, though all of them have potential.
She said that many don’t realize the potential they have and it is needed that the powe5r is realized and know that if youths are taken care of and things are today, things will be right tomorrow too.
Previously, Dr. Dalia Bhattacharjee in her speech had mentioned that the foundation was formed on January 12, 2015 to carry the message of Swami Vivekananda to the people and serve them with love and compassion.
Chaired by Arijit Sharma, during the programme, speeches were also delivered by many a member of the foundation on varied topics and also there were musical performances.
The programme was held at the conference hall of the Tourist Lodge, Dimapur. (Page News Service)

RPP to initiate crowd-funding for completion of Foothill Road