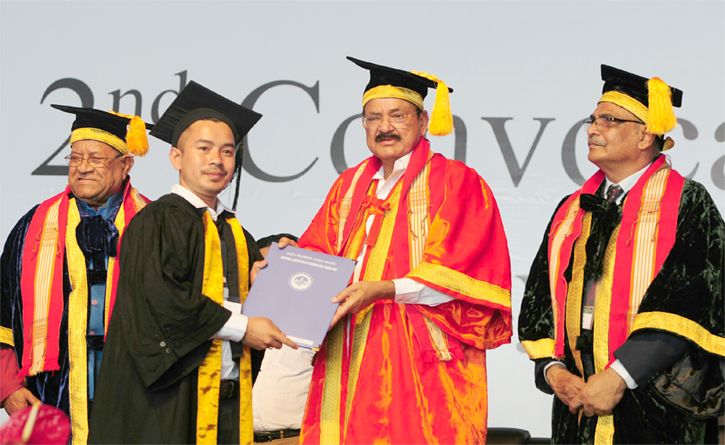 Vice President, M Venkaiah Naidu presenting the degrees to the students, at the 2nd Convocation of National Institute of Technology, in Chumukedima, Dimapur, Nagaland on May 23, 2018

Dimapur, May 23: Vice President of India, M Venkaiah Naidu today said that there is immense investment potentials in the Northeastern region and ASEAN countries should not be allowed to miss that opportunity.
In this, he said the Central and State Governments will have to work hand-in-hand. Addressing the 2nd Convocation of National Institute of Technology (NIT), Dimapur, the Vice President said improving connectivity is most important to bring the Northeast region into the mainstream. Air connectivity is also vital for promoting tourism, business and people-to-people contact, he said.
“We strongly believe that the corridors of connectivity should be converted into corridors of economic growth with a symbiotic market model of development,” Naidu said.
The Vice President said that Nagaland, a state rich in its traditional heritage is growing fast and setting up of NIT is an indication of the growing importance of this region. The real strength of any academic institute lies in maintaining high standards of excellence through its teaching and top quality research, he added.
Expressing hope that NIT Dimapur would become one of the leading centres of technical education in the country, the Vice President said, “Admittedly, it is doing appreciably well in catering to educational needs of students in Nagaland and the neighbouring states.”
“I foresee that NIT Nagaland, being a technical institute of national importance, will play a significant role in filling the industrial gap in Nagaland, by bringing industries, the corporate sector and technocrats from other parts of our country to Nagaland for its societal growth and uplift,” he said adding, “I am sure, the students passing out from the portals of NIT will not only be well qualified engineers, but many of them will also become successful entrepreneurs in their chosen fields.”
He said the students from Nagaland State and other North-Eastern states should take full advantage of this institute in acquiring world class technical education.
Naidu expressed happiness that the state is running the Institute of Communication and Information Technology (ICIT), Mokokchung and School of Engineering & Technology, Dimapur.
He expressed happiness that the institute has reserved home state quota completely for Naga students and wished Nagaland to grow and succeed in all its efforts and reach the greatest heights in future.
The Vice President said the real strength of any academic institute lies in maintaining high standards of excellence through its teaching and top quality research. This can be achieved only through dedication, discipline and determination of the faculty and students. There should not be any compromise on quality of teaching and research, he added.
“The knowledge and technical skills acquired by you will form the main pillars of your professional career. But the life skills acquired by you and the values of ethics, morality, integrity and compassion are equally important in navigating through the challenges and contributing to building an inclusive New India,” he said.
The Vice President advised the students to remember that their education does not end with the acquisition of a degree or by securing employment.
Stressing that one should give importance to his/her mother tongue for communication at home, Naidu said, “Our mother tongue, the language of home, is the root of life. We must ensure that this foundation is strengthened. If we lose a language we lose an important part of our cultural identity.”
He also said that one should also respect the language of others when he/she gives importance to his/her language.
He further said that learning is a life-long process and education is meant to enlighten them, develop them into a holistic individual, strengthen their character and inculcate the qualities required to face any challenging situation with a sense of equanimity. Their character is formed by the manner in which they surmount the challenges and they will experience highs and lows of life, but never lose sight of the goals they set for themselves, he added.
Stating that the students, who have graduated are going to commence a new chapter, Naidu said the first and foremost requirement is to set clear-cut goals and second is to strive relentlessly to achieve these goals.
He also said success largely depends upon the ability to execute efficiently any task on hand.
“Graduation day is a bit like looking into a kaleidoscope. It is full of pictures jumbled together-images from the past and those envisioning the future,” he said and congratulated all on their success and wished them an extremely satisfying and successful career.
Governor of Nagaland P B Acharya, who was the guest of honour, said that NITs are established in almost all the states of India to promote not only technical education but also to promote social ethics and a new generation with a vision of united developed India. He said NIT Nagaland is a developing institution, known for its stellar services to the state and nation, contributing significantly in field of education and research.
The Governor told the graduating students not to look at their degrees as an end to their education, but it should serve as a catalyst for their further pursuit of knowledge.
“Getting a degree is not an end goal of education but it is the beginning of empowerment to create wealth and strengthen the economy of the society and nation.
He said Nagaland, in spite of having five Universities is yet to become self sufficient in production of vegetables, fish, cereals, meat, fruits etc. and asked the Universities to give a serious thought to it. He also said being an epitome of the academic institutes of Nagaland, NIT Nagaland has to play a lead role in future, as it has always been doing so, in fortifying educational and research processes, following resources conservation as well as green technology based approaches. (Page News Service)