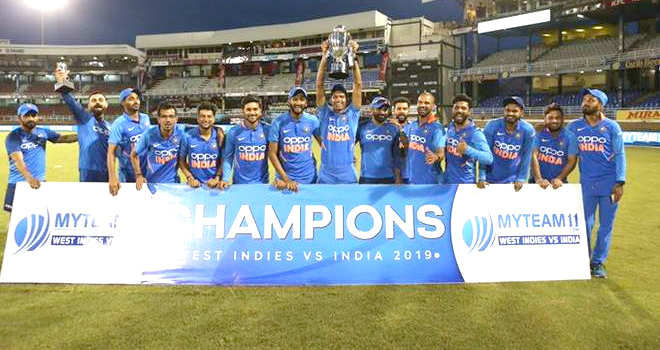 PORT OF SPAIN, August 15: Classy Virat Kohli upstaged rampant Chris Gayle as India defeated the West Indies by six wickets in the rain-affected third and final One-Day International of their series at the Queen’s Park Oval in Trinidad.
Set a revised target of 255 based on the DLS scoring method after Gayle blazed 72 in pacing the home side to 240 for seven off 35 overs, Kohli was at his most imperious in compiling an unbeaten 114 — his second consecutive ODI hundred — to pilot his team to 256 for four with 15 balls to spare.
His 43rd ODI hundred off 99 balls with 14 fours and overall impact on the series ensured him the double accolade of ‘Man of the Match’ and ‘Man of the Series’.
This successful chase under leaden skies and with the floodlights switched on gave India the series 2-0 following the abandoned first match in Guyana last week.
Kohli’s masterminding of another successful pursuit will leave Jason Holder and his West Indies team wary of what the Indian captain will have to offer with the bat in the upcoming two Tests in Antigua and Jamaica.
As commanding as his innings was though, the hosts were left to rue a straightforward opportunity missed by wicketkeeper Shai Hope off all-rounder Keemo Paul when the champion batsman was just on 11.
He received excellent support, as in the previous match, from Shreyas Iyer with an innings of 65 off 41 balls in a 120-run fourth-wicket partnership that tilted the match decisively India’s way following a brief wobble when left-arm spinner Fabian Allen had dismissed both Shikhar Dhawan and Rishabh Pant in the same over.
Allen had also effected the run out of Rohit Sharma for the first wicket of the innings but was unable to complete his seven-over allotment due to an injury sustained attempting to save a boundary.
While Kohli illuminated the gathering gloom in at the end of the match, it was Gayle who stole the show at the start.
Playing what is likely his final ODI in a 20-year-international career in which he hopes to still represent the Caribbean in defence of the World T20 title in 14 months’ time in Australia, Gayle savaged the Indian bowlers after Holder chose to bat first, occupying only 41 balls with five sixes and eight fours distinguishing his typically bludgeoning innings.
Opening partner Evin Lewis made a bold attempt to match arguably the most destructive power-hitter in the international game, his innings of 43 coming off 29 deliveries and embellished with three sixes and five fours.
Their rampage had taken the West Indies to 114 after ten overs, the most productive ten-over start to an ODI since the 2015 World Cup.
However, Lewis departed in the next over, the first bowled by leg-spinner Yuzvendra Chahal while Gayle was well caught by Kohli at mid-off striking out at Khaleel Ahmed.
As he left the field, the manner of the Indian players’ appreciation of the 39-year-old’s innings, and his acknowledgement of the applause as he departed the field, left the distinct impression that he had played his final ODI innings.
There followed a lengthy rain stoppage and the West Indies lost wickets in the mad scramble for runs on the resumption.
Ahmed picked up two more wickets to be the most successful bowler, although he was also the most expensive, conceding 68 runs off seven overs.
Mohammed Shami picked up two wickets but the spinners — Chahal, Kedar Jadhav and Yuzvendra Chahal — were the most economical for India during the frenetic innings. (AFP) 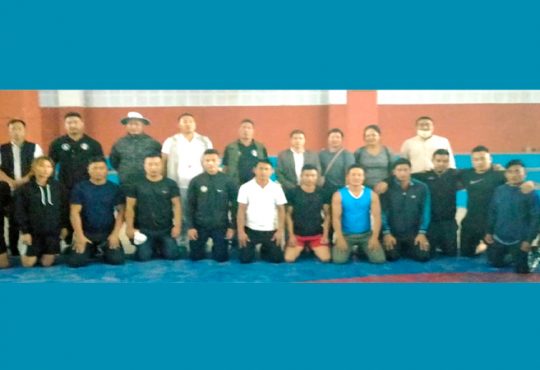 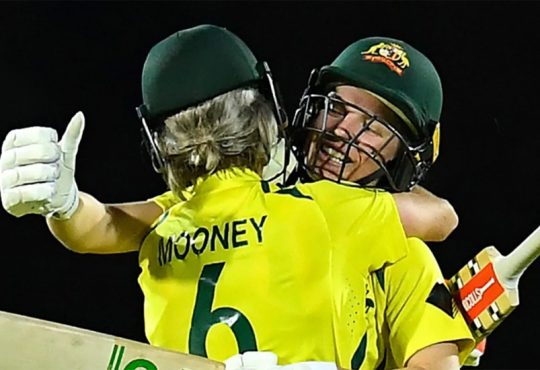