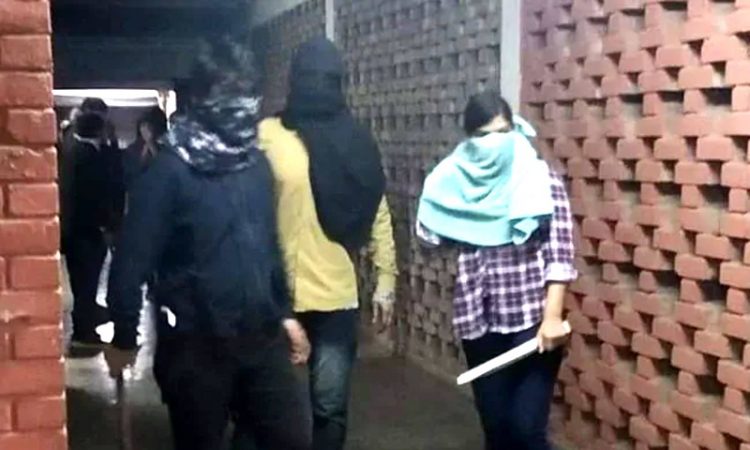 New Delhi, January 5: Violence broke out at Jawaharlal Nehru University (JNU) on Sunday night as masked men armed with sticks attacked students and teachers and damaged property on the campus, prompting the administration to call in police which conducted a flag march.
At least 18 people, including JNU Students’ Union president Aishe Ghosh, were injured and admitted to the All India Institute of Medical Sciences (AIIMS) as chaos reigned on the campus for nearly two hours.
The violence drew strong reactions from opposition parties which hit out at the BJP and accused “those in power” of trying to scuttle the voice of students.
Senior Union ministers and JNU alumni S Jaishankar and Nirmala Sitharaman swiftly condemned the incident. Sitharaman asserted that the government wants universities to be safe spaces for all students.
The Home and HRD ministries sought reports from Delhi Police and JNU administration, respectively. Home Minister Amit Shah spoke to the Delhi Police chief and enquired about the situation at JNU.
Sources said the violence started at around 5 PM.
The JNU administration said “masked miscreants armed with sticks were roaming around, damaging property and attacking people” and that police had been called in to maintain law and order.
The students alleged that the attackers entered hostels and assaulted students and teachers. Video footage aired by some TV channels showed a group of men, who were brandishing hockey sticks, moving around a building.
Delhi Police said it conducted a flag march and the situation was brought under control after it got a written request from the JNU administration.
The Left-controlled JNUSU and the ABVP blamed each other for the violence. The students’ union alleged that its members, including Ghosh, were injured in stone pelting by ABVP members.
But the RSS-backed students’ organisation alleged that its members were brutally attacked by Left-affiliated student outfits and 25 of them were injured, while 11 were missing. Among the injured was the secretary of its JNU unit.
The violence occurred while a public meeting by the JNU Teachers’ Association was being held.
“We had organised a peace meet at the tea point at 5 pm. As soon as it got over, we saw that a large number of people entered the campus and they started arbitrarily attacking teachers and students,” R Mahalaxmi, a professor of History department, said.
“How did such a large number of people with rods in their hands enter the campus, that is what we are wondering about. I think they were political activist instigated by the people who always call us anti-nationals,” Pradeep Shinde, another professor, said.
In a video shared online, Ghosh could be seen bleeding from the head. “I have been brutally beaten up by people wearing masks…. I was there with one of my activists when I was brutally beaten up. I am not even able to talk,” she is heard saying in the video.
Earlier, JNU registrar Pramod Kumar said in a statement, “This is an urgent message for the entire JNU community that there is a law and order situation on the campus…. The JNU Administration has called the police to maintain order.”
“This is the moment to remain calm and be on the alert…. Efforts are already being made to tackle the miscreants,” he added.
The JNUSU claimed that “ABVP members wearing masks were moving around on the campus with lathis, rods and hammers”.
“They are pelting bricks…getting into hostels and beating up students. Several teachers have also been beaten up,” the JNUSU claimed.
The Akhil Bharatiya Vidyarthi Parishad (ABVP) alleged that Left student organisations SFI, AISA and DSF were behind the violence.
“Around 25 students have been seriously injured in the attack and there is no information about whereabouts of 11 students. Many ABVP members are being attacked in hostels and the hostels are being vandalised by the Leftist goons,” the ABVP claimed.
Expressing shock over the incident, Congress leader Rahul Gandhi said, “The fascists in control of our nation, are afraid of the voices of our brave students. Today’s violence in JNU is a reflection of that fear.”
Swaraj Abhiyan chief Yogendra Yadav, who was allegedly manhandled outside the university, claimed no one was there to stop the “hooliganism” and he was not allowed to speak to the media.
Delhi Chief Minister and AAP convener Arvind Kejriwal tweeted, “I am so shocked to know about the violence at JNU. Students attacked brutally. Police should immediately stop violence and restore peace. How will the country progress if our students will not be safe inside univ campus?”
Kejriwal said he also spoke to the L-G over the issue.
Delhi Lieutenant Governor Anil Baijal condemned Sunday’s violence and said the situation was being “closely monitored”.
“The violence in JNU against students and teachers is highly condemnable. Directed @DelhiPolice to take all possible steps in coordination with JNU Administration to maintain law and order & take action against the perpetrators of violence. The situation is being closely monitored,” he tweeted.
The Congress alleged that the attack on JNU students was a “state-sponsored mayhem”.
Party general secretary Priyanka Gandhi Vadra visited the injured at the AIIMS.
CPI(M) general secretary Sitaram Yechury blamed the ABVP for the violence and alleged that the attacks were “planned” by those in power.
“It is a planned attack by those in power, which is afraid of the resistance provided by JNU to its Hindutva agenda,” he tweeted.
A large section of JNU students have been taking part in the protests against the amended Citizenship Act in the national capital.
The university was earlier embroiled in a major row over alleged anti-national slogans being raised by some students in February 2016. (PTI)