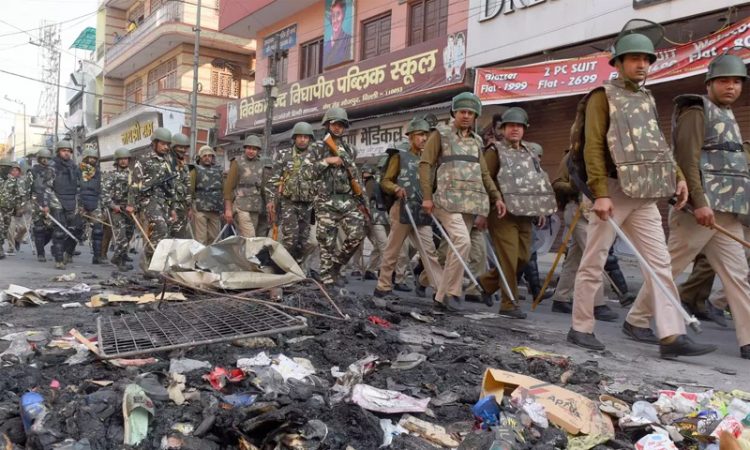 NEW DELHI, February 26: After two days of communal clashes that claimed 27 lives, a brittle quiet settled over parts of riot-hit northeast Delhi on Wednesday but there was violence in some other places with shops set ablaze and the body of an IB staffer found in a drain.
As police conducted flag marches and security personnel spread out across the northeastern edge of the national capital in a bid to quell the violence raging since Sunday, Prime Minister Narendra Modi in his first reaction appealed for peace and brotherhood. National Security Advisor Ajit Doval visited some riot-hit areas.
“What has happened has happened. Inshallah, there will be complete peace here,” he said as he walked through the mostly mixed neighbourhoods and congested lanes of northeast Delhi and met locals.
On Tuesday, he undertook a late night tour with Delhi Police Commissioner Amulya Patnaik and newly-appointed Special Commissioner SN Shrivastava.
Shrivastava’s appointment came in the wake of Patnaik facing flak for failing to curb the spiralling violence in the backdrop of US President Donald Trump’s visit, sources said.
The Delhi Police said it has arrested 106 people for their alleged involvement in the violence and have registered 18 FIRs.
On day three of the trouble, the death toll rose from 13 on Tuesday to 27 on Wednesday.
“The death toll has risen to 25,” GTB Hospital Medical Superintendent Sunil Kumar said. Unusually, the estimate of more than 200 injured and the dead has not come from the police but hospital authority.
Hospital authorities said of the 25 deceased at the GTB, at least nine received gun shots. One of the deceased is also a woman, authorities said.
Calling the situation in northeast Delhi “alarming”, chief minister Arvind Kejriwal said the Army should be called in as police is “unable” to establish control.
CPM general secretary Sitaram Yechury described the Delhi violence a “chilling reminder” of the 2002 Gujarat riots and demanded that Army should be called to control the situation.
Kejriwal, along with his deputy Manish Sisodia, later visited the violence-hit areas.
Away from ‘leader-speak’, fear hung like a heavy cloud over the area, littered with the detritus of a riot — mangled and charred vehicles, bricks, stones and jagged glass. The Intelligence Bureau staffer was found dead in a drain in Chand Bagh where he stayed. Sharma may have been killed in stone pelting, officials said.
Shops and schools were closed and many streets deserted with police making announcements that no one should come out of their homes.
Officials said the CBSE Class 12 English exam on Thursday has been postponed in the northeast and parts of east Delhi in view of the turbulent situation due to violence.
There was heavy deployment of force in Chand Bagh with security personnel not allowing anyone to come out.
The blackened walls of a ‘mazaar’ in the locality spoke volumes of the violence the day before.
In Ashok Nagar, a mosque was vandalised and set on fire by miscreants, a day before. The shops outside the mosque, belonging to Hindus and Muslims, were also set on fire.
Meharban, in his mid-thirties, was allegedly beaten by a mob in Chand Bagh area and later thrown into the drain.
“I went to buy flour. People there asked whether I was a Muslim and then started thrashing me. They later threw me in the drain of Chand Bagh,” he said.
The incident occurred around 2.30pm. Meharban, who sustained head injuries, could barely talk, was taken to a hospital in a PCR van.
Their livelihoods lost with their shops looted and their children in a state of panic after witnessing the bloodshed, many people were seen leaving their homes. Among them was a family that promised to be back, but said they did not know when.
At the GTB Hospital, many grieving family members were waiting to collect the bodies of their dear ones.
Asked if the victims have been identified, GTB Hospital Medical Superintendent said, “Many people have been identified, some are yet to be.” He, however, declined to divulge the identity of the deceased.
Patients have several kinds of injuries, including from gunshots, stones and other weapons and many were hurt while jumping from rooftops to escape the rioters, hospital authorities said.
The “gush” of injured patients had reduced to a trickle.
The injured recounted horrific accounts of violence that they witnessed and how they managed to escape the deadly violence.
Districts magistrates of North-East and Shahadra districts accompanied by senior officials of the Revenue Department and the Delhi Disaster Management Authority (DDMA) were also the hospital to take stock of the situation.
That was also a concern of Solicitor General Tushar Mehta who asked a Supreme Court bench not to make any adverse observations relating to the violence as it will demoralise the police force.
An apex court bench of justices SK Kaul and KM Joseph lashed out at law enforcing agencies for allowing the “instigators of violence” to get away and said they should act as per law without waiting for somebody’s nod.
“If somebody makes an inflammatory remark, police has to take action,” it said.
The Delhi High Court also reprimanded Delhi Police.
“… We should never allow another 1984… especially under the watch of the court and under your (Delhi
Police) watch… We have to be very, very alert,” a bench of justices S Muralidhar and Anup J Bhambhani said.
In a midnight hearing, the Delhi High Court directed police to ensure safe passage to government hospitals and emergency treatment for those injured in the communal violence erupted in northeast Delhi
over the amended citizenship law. (PTI)