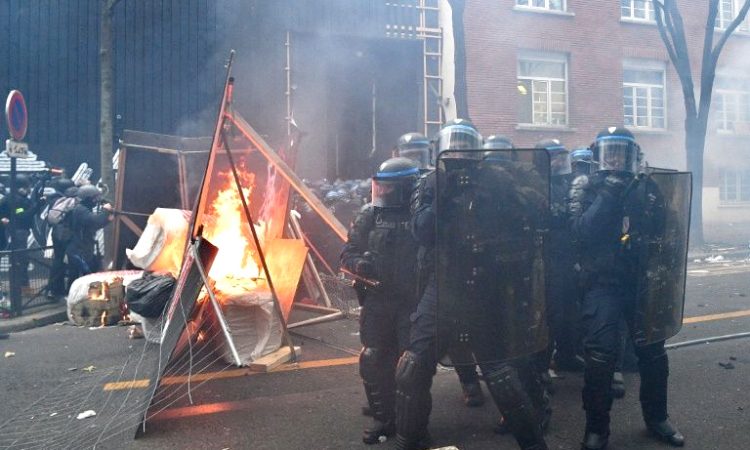 Paris (France), December 5: Scores of hooded anarchists launched projectiles at riot police, smashed up shop windows, torched cars and burned barricades during a demonstration in the French capital on Saturday against police violence. The police fired back volleys of tear gas.
Thousands of people had began marching peacefully in Paris when the clashes erupted between police and pockets of protesters, most dressed in black and their faces covered. Some used hammers to break up paving stones.
The protesters were denouncing police brutality and President Emmanuel Macron’s security policy plans which the demonstrators say would restrict civil liberties.
They waved banners that read “France, land of police rights” and “Withdrawal of the security law”.
Paris police said that some 500 “casseurs” – which translates as hoodlums or rioters – had infiltrated the protest, according to BFM TV. Twenty-two arrests had been made, the force added.
France has been hit by a wave of street protests after the government introduced a security bill in parliament that set out to increase its surveillance tools and restrict rights on circulating images of police officers in the media and online.
The bill was part of Macron’s drive to get tougher on law and order ahead of elections in 2022. His government also said the police needed to be better protected from online hate.
But the draft legislation provoked a public backlash.
The beating of a Black man, music producer Michel Zecler, by several police officers in late November intensified anger. That incident came to light after closed circuit television and mobile phone footage circulated online.
In a U-turn earlier this week, Macron’s ruling party said it would rewrite the article that curbs rights to circulate images of police officers. But many opponents say that is not enough.
“We’re heading towards an increasingly significant limitation of freedoms. There is no justification,” said Paris resident Karine Shebabo
Another protester, Xavier Molenat, said: “France has this habit of curbing freedoms while preaching their importance to others.”
As darkness fell, live television images showed one group of anarchists ransacking the branch office of a bank, throwing piles of paperwork onto a fire burning on the pavement outside.
There were peaceful protests in Marseille, Lyon, Rennes and other big cities. (Reuters)