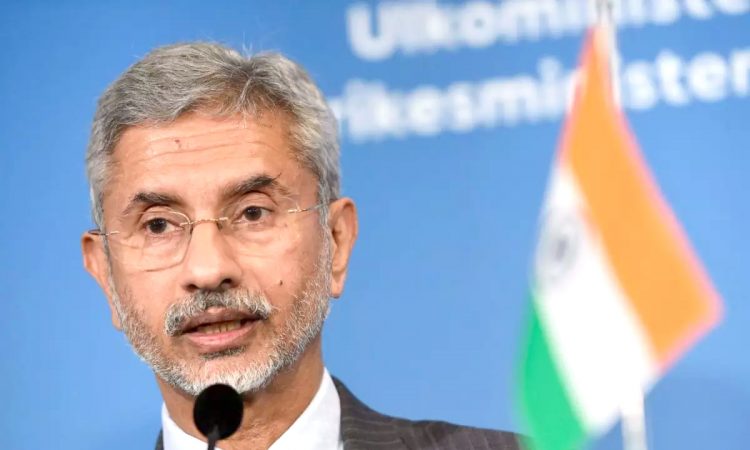 Moscow, July 9: Voicing concern over violence in Afghanistan, India has called for immediate stop on bloodshed in the war-torn nation and said that the “legitimacy aspect” of who should rule the country is of importance and should not be ignored.

“Of course we are concerned at the direction of events in Afghanistan,” External Affairs Minister S Jaishankar said while responding to a question during a joint press conference with his Russian counterpart Sergey Lavrov.
His remarks came in the midst of Taliban militants seizing dozens of districts in recent weeks and are now thought to control about a third of the country, ahead of the complete withdrawal of US and Western troops from Afghanistan.
Under a deal with the Taliban, the US and its NATO allies agreed to withdraw all troops in return for a commitment by the militants that they would prevent extremist groups from operating in areas they control. US President Joe Biden announced on Thursday that American troops will be out of the country by August 31.
“The point right now we stress is that we must see a reduction in violence. Violence cannot be the solution for the situation in Afghanistan,” the foreign minister said.
“At the end of the day, who governs Afghanistan has a legitimacy aspect of it. I think that is something which cannot and should not be ignored,” said Mr Jaishankar, who is in Russia on a three-day visit.
Taliban’s violent campaign to seize more territory could affect its desire to seek international legitimacy as the world powers will not accept the imposition of a government in Kabul by force, according to experts.
The Taliban ruled Afghanistan by brute force from 1996 to 2001 when US invasion toppled their government. For more than 30 years, there have been international conferences, there have been groups, there have been formats to discuss how to stabilise and bring about peace in Afghanistan, Mr Jaishankar said, adding that the reason is because it has proven implications for regional security and regional stability.
“If we have to seek peace within Afghanistan and around, it’s important for India and Russia to work together to ensure that much of the progress in economic, social terms are maintained. We are committed to an independent, sovereign and democratic Afghanistan,” he said.
Mr Jaishankar’s trip to Moscow coincides with the visit of a Taliban delegation on Thursday to offer assurances that their quick gains on the ground in Afghanistan do not threaten regional countries.
Taliban spokesman Mohammad Sohail Shaheen said their team came to Moscow to “assure that we won’t allow anyone to use the Afghan territory to attack Russia or neighboring countries,” Russia’s Tass news agency reported.
India, a major stakeholder in the peace and stability of Afghanistan, has been supporting a national peace and reconciliation process which is Afghan-led, Afghan-owned and Afghan-controlled.
The US and the Taliban signed a landmark deal in Doha on February 29, 2020 after multiple rounds of negotiations to bring lasting peace in war-torn Afghanistan and allow US troops to return home from America’s longest war.
India has been keenly following the evolving political situation after the US signed the peace deal with the Taliban. The deal provided for the withdrawal of American troops from Afghanistan, effectively drawing curtains on Washington’s 18-year war with Taliban in the country.

India has said it was committed to steadfastly supporting Afghanistan during its transition. Its development partnership of $3 billion, including more than 550 Community Development Projects covering all 34 provinces, is aimed at making Afghanistan a self-sustaining nation. (PTI)