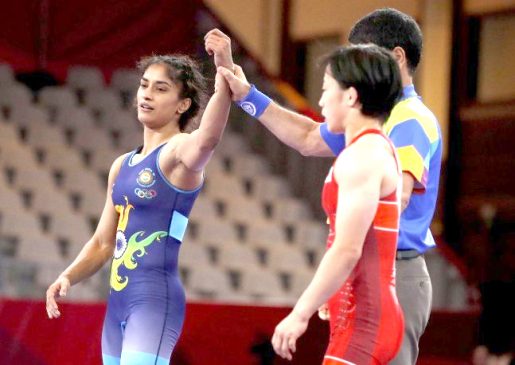 JAKARTA, August 20: Vinesh Phogat on Monday created history by becoming the first Indian woman wrestler to win a gold medal at the Asian Games, brushing aside her rivals with remarkable ease in the 50kg category here.
Vinesh was a medal-favourite in her category and was likely to face stiff competition from Japan’s Yuki Irie whom she outplayed 6-2 in the final.
It is surely a ground-breaking achievement for the 23-year-old firebrand Haryana wrestler, who is connected to Dangal-famed Phogat family. Putting behind her heart-breaking loss at the Olympics two years ago, Vinesh began her victorious campaign with a revenge win against Chinese Yanan Sun against whom she had suffered that terrible leg injury which cut short her journey in Rio. This time Vinesh did not give her opponent any chance and came out a dominant winner with a 8-2 score. (PTI)

PALEMBANG, August 20: India’s Deepak Kumar produced a late surge to steal a silver in the men’s 10m rifle event at the Asian Games, giving the shooting contingent its second medal here.
China’s defending champion Yang Haoran was a cut above the rest, winning the gold with an aggregate of 249.1.
Deepak, who was not in the race for a medal until the 18th shot when he produced a perfect 10.9, earned his maiden Asian
Games medal with 247.7, pushing Taipei’s Lu Shaochuan to third with 226.8 in the 24-shot final.
Ravi Kumar, who had won a mixed team bronze alongside Apurvi Chandela on Sunday, was unlucky to miss out on a medal. He was eliminated after the 20th shot, scoring 205.2.
The 33-year-old Deepak did not mind the long wait for a major medal, 14 years after he picked up the sport. (PTI)