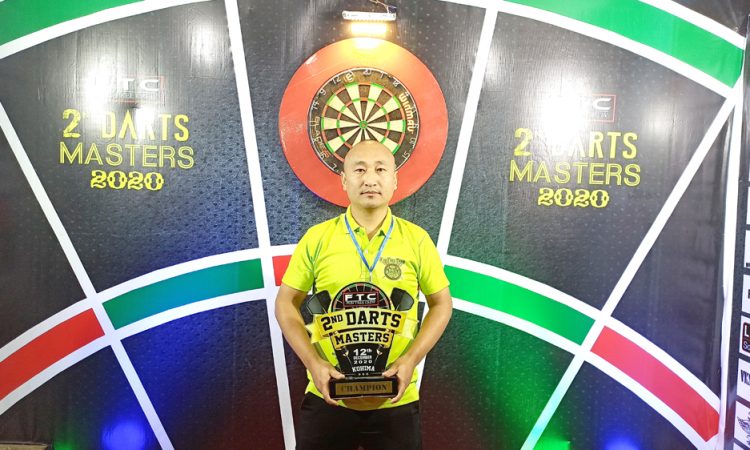 Our Correspondent
Kohima, December 12: Vikeheli Suohu fends off tough competition from Lijanthung to retain the 2nd Darts Masters 2020 which was organized by Fun Tree Crew (FTC) at Vivid Restaurant on December 12.
Even though the prize money for the championship is set at Rs.15,000, Suohu walked away from the venue Rs.18,000 richer as he also bagged the best leg category.
Runner up Lijanthung managed to put up a stiff competition for Suoho in some sets but had to contend with a second place finish in this year’s championship. He was awarded a Certificate, a trophy and a cash prize of Rs.10,000.
Sharing his experience about the 2nd Darts Masters 2020, Suohu said, “This year’s overall competition was tougher than last year.”
The skill level among the throwers community of Nagaland is improving over the years, he added.
He also expressed his gratitude towards FTC for organizing a Dart Championship with so much professionalism. “The live-stream, instant score update on the scoring monitor and the entirety of the event has provided the much needed exercise at handling pressure in tough competitions,” said the Champion who is all set to represent India in JDC’s Virtual Amateur Dart Championship which has been postponed to June from April next year.
In spite of his modest demeanour, Suohu is also the winner in the Open Darts Championship Dimapur in 2014, FTC Darts Masters in 2019 and Joint 3rd (Team Event) in the IDF (Indian Darts Federation) National Darts Championship in 2019 and Joint 9th (Open Singles) in the IDF National Darts Championship in 2019.
Burakum Ao and Nieketuo Suohu shared the Joint Third finish, and both were awarded certificates, trophies and a cash prize of Rs. 5000 each.
Niketuo Suohu also won the highest Check Out category for which he was also awarded a cash prize of Rs.3000.
Kilen Jamir was the highest scorer of the night, a category promised a cash prize of Rs.3000 in this particular event.
Lanu Pongen was adjudged the winner of Golden Dart Award for the event. Giving away the award, President of Nagaland Darts Association, Lima said that Pongen was given the award because of his presence at every dart event in Nagaland and his unwavering support for the sport in the state. He was awarded Rs.2000.
Also, Reagan Sadham was appraised as the most promising player of the championship by the organisers. He was awarded a cash prize of Rs.3000.
Yashilemba Longkumer was also awarded for registering first for the championship through online. He was awarded with a set of darts from Vikehelie’s Accessories.
The 2nd Darts Masters 2020 registered a total of 24 players.