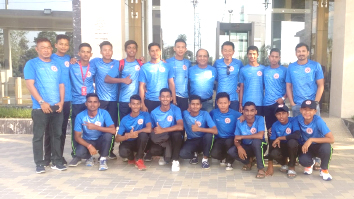 Dimapur, October 28: In the second match of the ongoing Vijay Merchant (U-16) three-day match of Nagaland being played at Bhubaneswar form October 21 to 23, Nagaland team defeated Sikkim by an innings and 45 runs. Earlier, in the first match, Nagaland defeated Arunachal Pradesh at Bongaigaon in Assam.
In the first innings, Nagaland were all out at 255 with Arjun and Yash contributing 110 and 50 runs respectively.
For Sikkim, Zakir took 6 wickets while Tarun and Sunil claimed 2 each.
In the first innings, Sikkim were all out at 82 in 52.1 overs. Zakir and Adiv contributed 40 and 19 runs respectively.
For Nagaland, Odilemba took 5 wickets, while Ranjen took 4.
In the second innings, Sikkim were all out at 128 in 57.1 overs. Zakir contributed 28 runs for this team while Vivek and Tarun scored 23 and 18 runs respectively.
For Nagaland, Ezaz took 2 wickets while Ranjen and Yash 3 wickets each.
In the next match, Nagaland will play against Mizoram at Golaghat (Assam)
(Page News Service)