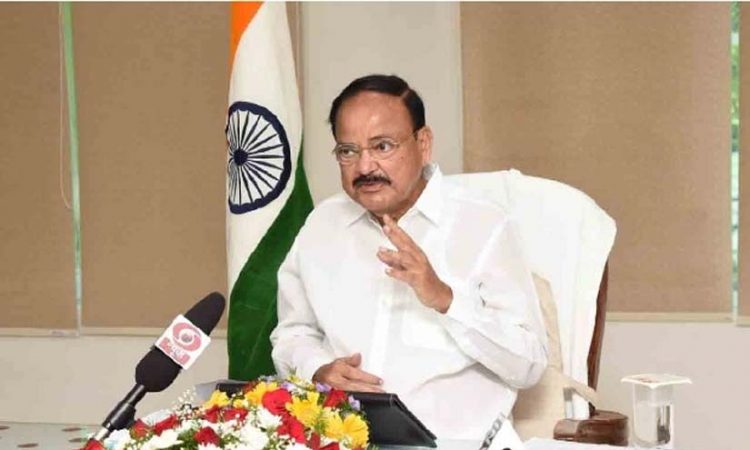 Hyderabad, September 4: Vice President M Venkaiah Naidu on Saturday called upon the people to fight against divisive forces that seek to divide society on the lines of religion, region, language, caste, creed or colour.
In the 75th year of the country’s Independence, every Indian must take a pledge to further strengthen unity and harmony in the country’s hugely diverse society, he said.

Naidu, who was addressing the students and teachers of Sri Aurobindo International School here after inaugurating a photo-exhibition on the life of Sri Aurobindo, emphasised that bridging all divisions was necessary for the greatness of India’s future. Highlighting the positive aspects of religion, he said if everyone follows one’s religion in true spirit, there will not be any religious conflict, an official release said.
Responding to a student’s question, he said reforms were needed in the United Nations so that it becomes a truly representative organisation where the soul and heart of the nations come together. Expressing disapproval of some nations mentality to consider themselves as superior to others, he said equal respect for all is a prerequisite to bring unity of mankind. “Separate identities are going to be there but these identities should not divide us,” he said.
Reiterating Sri Aurobindo’s vision for India’s spirituality, Naidu said a reawakening needs to come about in terms of the country’s rich legacy of spiritual wisdom which would need to be recast into new forms and expressions to make it globally relevant and in keeping with the contemporary times. Observing that Bharat Mata needs to delve deep into her own treasures, he exhorted the country’s youth to be independent and original in their thinking, drawing upon native sources instead of being content as poor imitators of the West. He called for rewriting Indian history with an Indian perspective to instill a sense of pride in “our glorious cultural heritage among the younger generation.” Naidu said GDP growth and wealth creation are not an end in themselves, rather they are means to bring happiness in people’s lives which should be the ultimate aim.
Describing Sri Aurobindo as a great revolutionary Yogi, philosopher, poet and freedom fighter, Naidu said he remains an eternal source of inspiration for every Indian. “Through his speeches and writings, he not only kindled a strong desire for complete independence among the masses but also focused on spiritual regeneration of the nation,” Naidu said.
Referring to Sri Aurobindo’s message to the nation on the day of Independence, in 1947, he said that his words were of great purpose and relevance at the individual, national and global level even today. Noting that Sri Aurobindo wanted Asia to regain a great role in the progress of human civilisation, he said building a prosperous and united India will be crucial for the rise of Asia.

Stressing that education is not just for employment but for enlightenment, he called for making India a Vishwa Guru again. “India should become Vishwa Guru not to dominate the world but to give knowledge and to spread light.” The Vice President said the establishment of Auroville at Puducherry represents Sri Aurobindo’s vision for world unity.
Quoting Sri Aurobindo, Naidu said India can realise its full potential only by a system of National Education and urged the youth to work towards turning Sri Aurobindo’s dreams into reality. Noting that uplift of all human beings is at the core of Sri Aurobindo’s teachings, he called for consistent efforts to spread his vision across India and the world. (PTI)