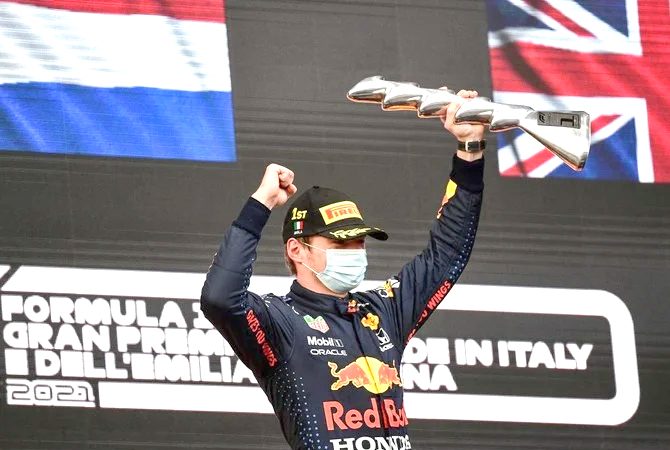 Red Bull driver Verstappen muscled past pole sitter Hamilton on the first corner at Imola to set up his impressive first win of the season.
“I surprised myself. We worked really hard to make that better. In these tricky conditions we did a great job,” Verstappen said.
Lando Norris in a McLaren took third for the Briton’s second successive podium ahead of Charles Leclerc for Ferrari.
The outcome of a compelling second leg of the Formula One season confirmed Verstappen’s stature as a formidable obstacle to Hamilton’s quest for an unprecedented eighth drivers’ crown.
After winning the season-opener in Bahrain and putting in the fastest lap on Sunday Hamilton leads Verstappen by one point ahead of the Portuguese Grand Prix next time out.
A high-speed crash involving Mercedes’ Valtteri Bottas and George Russell in a Williams forced the race to be suspended as debris was cleared off the Imola circuit.
The pair collided at over 300kmh on lap 34, both drivers shaken as their wrecked cars were lifted off the track.
The red flags appeared a lap after an uncharacteristic slip-up from Hamilton saw the Mercedes world champion hurtle off the circuit into a gravel pit when placed second on a tracherous rain-hit track.
Half an hour after the suspension, a rolling re-start saw Verstappen set off in front of Leclerc and Norris. Hamilton, his car repaired, had work to do from ninth.
As Verstappen calmly reeled in his 11th career victory, but first in Italy, Hamilton weaved his way up to sit third, and then second after passing Norris with three laps remaining.
“First time I’ve made a mistake in a long time, but I’m grateful I could bring he car home,” said a relieved Hamilton.
Quartararo wins Portuguese MotoGP with Marquez seventh on comeback

PORTIMAO (Portugal): Fabio Quartararo won his second consecutive race when he took the Portuguese MotoGP at Portimao on Sunday, with six-time champion Marc Marquez seventh in his first race back after nine months out.
“I feel full confidence,” said French Yamaha rider Quartararo, who started last season strongly only to fade out of contention.
Italian Francesco Bagnaia on a Ducati was second with Spanish world champion Joan Mir of Suzuki third.
Franco Morbidelli (Yamaha-SRT) and South African Brad Binder (KTM) completed the top five.
Marquez’s seventh-placed finish came on his return after three bouts of surgery on the right arm he broke in the 2020 opener at Jerez.
He qualified in the second row and admitted on Saturday that he was “going to suffer” after such a long time away from racing.
Quartararo’s compatriot Johann Zarco (Ducati-Pramac), who had led the rider standings before Sunday’s race, crashed out on lap 20 while challenging for the podium after leading the early stages of the race.
That allowed Quartararo to take a 15-point lead in the overall standings after three races.
Despite a poor start from pole position, Quartararo patiently climbed back up to take the lead on the ninth of the 25 laps.
He benefitted from the crash of his most threatening rival, Spain’s Alex Rins (Suzuki), on lap 19, and steadily extended his lead to take the win by 4.809sec.
“Now we know what we need to work to feel fast. What pace. I was riding easy but still making a gap to Paco,” said Quartararo, who turns 22 on Tuesday.
“It will be a great celebration for my birthday in two days.”
Starting from 11th Bagnaia said his aim “was to finish in the top five.”
“I overtook a lot of riders,” he said. “I’m very happy to be second.”
Mir gained his first podium of the season.
“Really difficult race,” he said. “So fast, also so hot.”
Spaniard Maverick Vinales (Yamaha), winner of the first race of the season in Qatar, was only 11th after a poor start.

Italian Valentino Rossi, who has been struggling since the beginning of the year and his arrival at Yamaha satellite team SRT from the Japanese factory team, also fell.
Spaniard Jorge Martin (Ducati-Pramac), who injured his right hand and ankle in a heavy crash on Saturday, missed the race and will undergo surgery in Barcelona. (AFP)